2 with high-altitude sickness, 10 others rescued off glacier 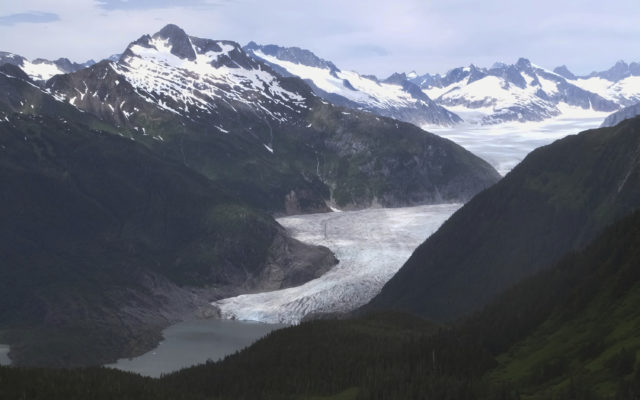 This Thursday, July 6, 2017 photo shows a view from Heintzieman Ridge overlooking the Mendenhall Glacier at it spills from the mountains toward Mendenhall Lake in Juneau, Alaska. (AP Photo/Becky Bohrer)

ANCHORAGE, Alaska (AP) — Two mountaineers experiencing high-altitude sickness were taken to a hospital in Anchorage after spending days in the wild, officials said Wednesday. Another was treated for minor frostbite injuries.

The three were part of a group eight clients and four guides in Wrangell-St. Elias National Park. All 12 were removed Tuesday from Klutan Glacier, southeast of Mt. Bona.

The group traveled down to the 10,000-foot (3,048-meter) level where a National Guard Chinook helicopter landed,

The initial plan was to only remove the three ailing mountaineers, and the others were going to continue their expedition, Aspelund said.

The rescue played out over several days as poor weather — including 60 mph (97 kph) winds and snow — prevented helicopters from landing in about 20 attempts The poor weather also made the guide’s aircraft unable to land.

“As they weather made the extraction so much harder and multiple days at that point, when the Chinook landed, they were like, ‘OK, let’s all go,’ ” Aspelund said.