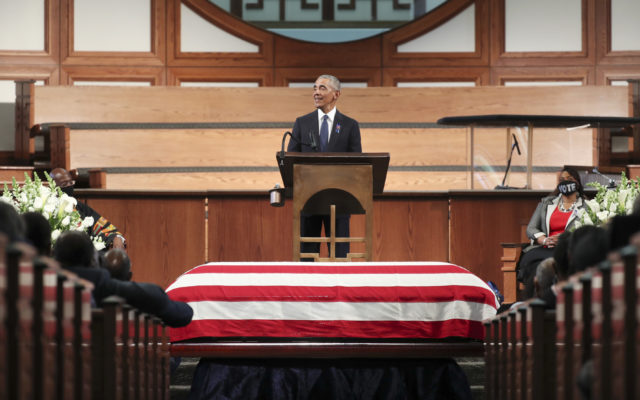 ATLANTA, GEORGIA - JULY 30: Former President Barack Obama gives the eulogy at the funeral service for the late Rep. John Lewis (D-GA) at Ebenezer Baptist Church on July 30, 2020 in Atlanta, Georgia. Lewis, a civil rights icon and fierce advocate of voting rights for African Americans, died on July 17 at the age of 80. (Photo by Alyssa Pointer-Pool/Getty Images)

By JEFF MARTIN Associated Press
ATLANTA (AP) — Three former presidents are in attendance at John Lewis’ funeral as he is mourned, revered and celebrated as an American hero at Ebenezer Baptist Church in Atlanta. The private funeral began Thursday morning after nearly a week of mourning that took him from his birthplace in Alabama to the nation’s capital of Washington to his final resting place in his home of Atlanta. Lewis died July 17 at the age of 80. In an essay that he asked to be published on the day of his funeral, Lewis urged others to continue to seek justice. Former President Barack Obama called Lewis “a man of pure joy and unbreakable perseverance.”