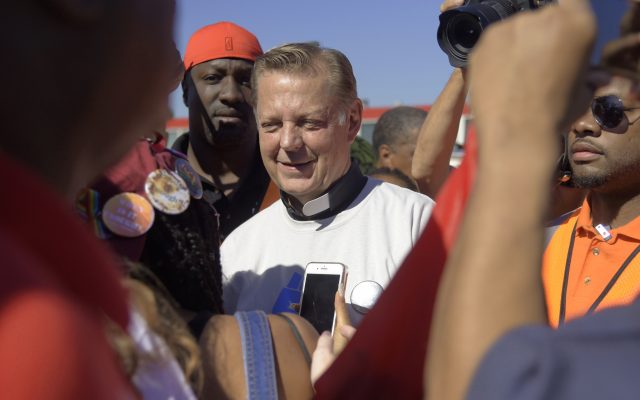 FILE - In this Saturday, July 7, 2018 file photo, The Rev. Michael Pfleger speaks to protesters before marching on the Dan Ryan Expressway in Chicago. A third man has come forward with allegations that Rev. Pfleger made an unwanted sexual advance against him as a teenager, following two brothers' allegations that the priest abused them decades ago when they were teens. (AP Photo/Annie Rice, File)

CHICAGO (AP) — A third man has come forward with sexual abuse allegations against a Chicago priest who has gained widespread acclaim for his activism. The 59-year-old man alleges in an affidavit shared Tuesday with the archdiocese that in 1979, when the accuser was 18, the Rev. Michael Pfleger grabbed his crotch at St. Sabina Church while he pretended to sleep. He told the Chicago Tribune that he came forward because he feels he owes it to two brothers who have faced criticism for accusing Pfleger of abusing them decades ago when they were teens. The priest’s attorneys say he emphatically denies all of the allegations. The archdiocese says Pfleger agreed to live away from his parish while he is being investigated.