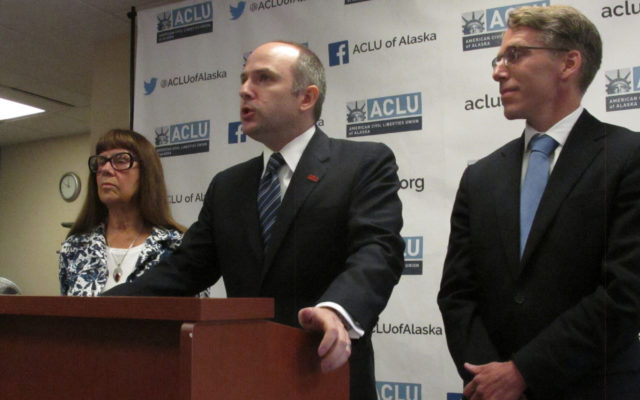 Joshua Decker, center, director of the ACLU of Alaska, speaks at a press conference with Bonnie Jack, left, and John Kauffman on Wednesday, July 17, 2019, in Anchorage, Alaska. ACLU of Alaska is representing Jack and Kauffman in a lawsuit filed against Alaska Gov. Mike Dunleavy for his veto of $334,700 from the Alaska Court System budget. (AP Photo/Dan Joling)

The nonprofit organization says Dunleavy’s reduction of the Alaska Court System budget by $334,700 is an attack on the independent judiciary.

Dunleavy last month vetoed than $400 million from the budget approved by the legislature.

His reduction to the court system budget was tied to an Alaska Supreme Court decision on abortion.

The court struck down as unconstitutional a state law seeking to define what constitutes medically necessary abortions for Medicaid funding.

ACLU of Alaska director Joshua Decker says Dunleavy’s veto is a grossly inappropriate attempt to use money to coerce judges to a political end.

A spokesman for Gov. Dunleavy did not respond immediately to an email requesting comment.