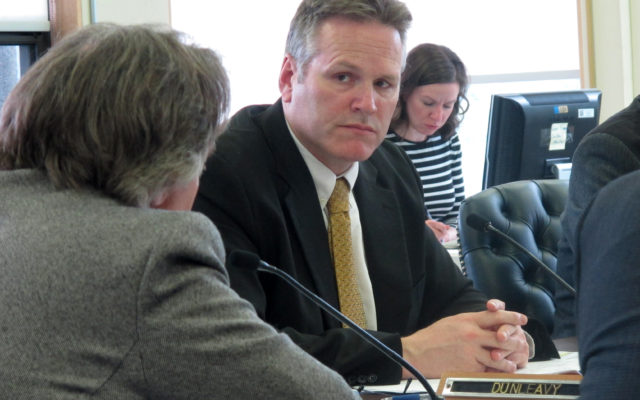 FILE - In this Tuesday, May 17, 2016 file photo Alaska state Sen. Mike Dunleavy listens during a Senate Finance Committee meeting on an oil and gas tax credit rewrite, in Juneau, Alaska. Dunleavy says he will resign his seat to focus on running for governor this year. (AP Photo/Becky Bohrer,File)

JUNEAU, Alaska (AP) — Big issues Alaska lawmakers faced at the start of the regular session in January remain unsettled at the end, including the state budget and size of the check to be paid to residents from Alaska’s oil-wealth fund.

Lawmakers face two special sessions, the first of which starts Thursday, with Gov. Mike Dunleavy seeking resolution on the dividend and fiscal issues that have vexed the state for years. Legislators share the concerns but whether they can agree on a plan is unclear.

Dunleavy called the first session to address the budget and the dividend paid from the nest-egg Alaska Permanent Fund. Senate President Peter Micciche has suggested taking more time to work on the dividend issue and tackling it later this summer, when lawmakers are set to meet for a second special session on revenue, spending and other issues.

Micciche, a Soldotna Republican, raised concerns recently about tackling the dividend issue “in a bubble,” without other pieces of a possible fiscal plan and a way to pay for the dividend. The Legislative Finance Division has estimated deficits around $1 billion in the coming years under a new dividend approach similar to one proposed by Dunleavy, with Dunleavy’s budget office projecting smaller numbers.

Rep. Jonathan Kreiss-Tomkins, a Sitka Democrat, said the discussion needs to be broader than the dividend.

“All the pieces have to be addressed simultaneously in order for people to feel comfortable committing themselves to a certain position on a certain policy,” he said.

The governor’s office said Dunleavy “looks forward to productive discussions” during the special session set to begin Thursday. Special sessions can run as long as 30 days.

Dunleavy, since taking office in 2018, has argued unsuccessfully that a decades-old formula to calculate dividends should be followed until it’s changed. The formula was last used in 2015, amid budget deficits, with the amount since then generally set by lawmakers.

The Alaska Supreme Court in 2017, in upholding then-Gov. Bill Walker’s reduction of money available for dividends a year earlier, ruled that absent a constitutional amendment, the dividend must compete like other state programs for money. In 2018, lawmakers began using permanent fund earnings, long used for dividends, to also help cover government expenses. They also sought to cap the amount that could be withdrawn for both purposes, adding to the tension.

Dunleavy has now proposed a constitutional amendment that would restructure the permanent fund, rolling its spendable earnings reserve into the fund’s constitutionally protected principal, and place in the principal an endowment that is used to help communities with high electricity costs. The proposal calls for a draw limit from the permanent fund, with half the draw going to dividends.

His office said the Republican governor also was proposing moving $3 billion from permanent fund earnings to a budget reserve account that lawmakers could use while other pieces of a fiscal plan are implemented.

Legislative leaders have called the proposal a starting point. A constitutional amendment would require two-thirds support in each the House and Senate to qualify for the November 2022 ballot.

Kreiss-Tomkins said he understands if Alaskans are skeptical about whether lawmakers can come together on a plan. The Legislature has gone through billions of dollars in savings amid a persistent deficit.

He said he thinks finishing the budget will likely be the focus of the first special session.

“I haven’t spoken with anybody who feels like we’re ready to dive into these other pieces mostly because there’s just, like, no momentum on it,” he said Wednesday. “I really genuinely hope that over the next couple of months, the groundwork can be laid and the framework built for some momentum and for sort of driving toward consensus on these pieces.”

Kreiss-Tomkins said he has seen a new level of engagement from Dunleavy and thinks there is a greater “level of urgency and collective sense that the status quo is untenable.”

The Senate was expected to begin debate on possible amendments to a budget package during Wednesday’s session, though the session was delayed. The package that advanced from the Senate Finance Committee proposed a $1,000 dividend this year.

The budget that passed the House did not include a dividend amount. A dividend calculated under the longstanding formula would be around $3,000, according to estimates.

It is expected the budget will go to a conference committee, where House and Senate negotiators will hash out differences.

Under a state law passed in 2018, once the regular session expires Wednesday, lawmakers cannot collect the $293 daily allowance they have been getting until after a budget is passed. Lawmakers missed that budget deadline in 2019 but after a budget was passed that year in special session, legislative leaders approved retroactive allowances for lawmakers who requested them.

The Legislature passed a budget last year in March amid COVID-19 concerns.