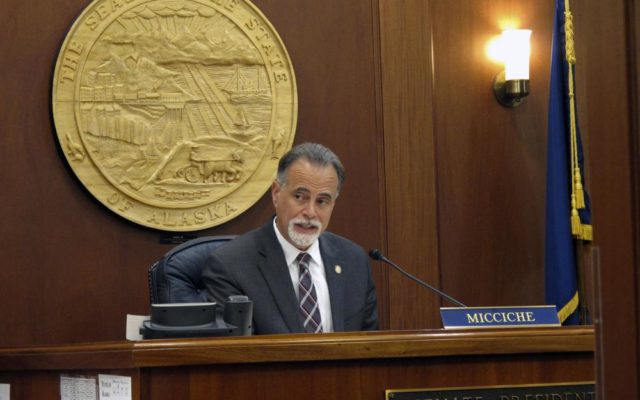 JUNEAU, Alaska (AP) — The Alaska Legislature approved a state spending package following a series of dramatic votes in the Senate on Wednesday and impassioned speeches highlighting the tensions over the annual dividend paid to residents and the frayed nerves after five months in session.

The budget would result in a $525 dividend this year and leave in doubt funding for other programs and projects after the Senate, like the House before it on Tuesday night, failed to garner sufficient support for a key vote.

But Senate leaders insisted work would continue toward trying to win the support needed for at least a $1,100 dividend and to keep funding for things such student scholarships, rural electric costs and other programs and projects intact.

“Those things being out there force these four sides to work together better,” Senate President Peter Micciche, a Soldotna Republican, said of the four caucuses involved. “I don’t think that’s a negative thing.”

It’s uncertain whether that can happen in the current special session, which is due to expire Friday unless lawmakers end it early.

Gov. Mike Dunleavy, in a statement before the Senate vote, called the spending plan that passed the House incomplete and urged lawmakers “to reengage” and “craft a solution, including all the necessary components, that can pass” both chambers by Friday.

The special session was preceded by a four-month regular session, and frustration was evident in floor debate on both sides.

It was noteworthy particularly in the Senate, where the 14-member, Republican-led majority was not bound to vote for the budget, a departure from a long-running legislative practice.

Several Republicans spoke against the strings attached to budget items, including to a higher dividend, with Sen. Roger Holland, an Anchorage Republican, calling the budget proposal a “Dumpster fire.”

Senate Majority Leader Shelley Hughes, a Palmer Republican, said funding for the dividend didn’t need to be cobbled together from various sources and that she had problems with that approach.

Dividends traditionally have been paid using earnings from the nest-egg Alaska Permanent Fund. But the budget proposal that advanced from a conference committee cobbled together money for dividends of about $1,100 from sources including the constitutional budget reserve fund that requires three-fourths support in each the House and Senate to access. The Legislative Finance Division said a failure to reach the three-quarter threshold would mean $525 dividend checks this year. Both the House and Senate failed to win three-quarters support.

Sen. Natasha von Imhof, an Anchorage Republican, gave a fiery speech outlining potential fallout if a budget were not passed with the start of the new fiscal year looming July 1. She noted the dividend amounts contemplated in the budget and said Alaskans also have received federal aid checks over the last year to help ease the financial impacts of the pandemic.

A focus should be on reinvigorating the economy through year-round jobs, she said.

“But, no, here we are … debating a dividend. The greed and the entitlement is astounding to me. I just don’t fathom it,” she said. “My father is at home dying of cancer, and I am here, listening to the biggest crock of crap I’ve ever heard.”

Sen. Bert Stedman, a Sitka Republican and one of the budget negotiators, said the proposed $1,100 dividend reflected what the state could afford. He is among those who has balked at exceeding a withdrawal limit from permanent fund earnings for dividends and government costs.

In retrospect, he said, he wished funding for the dividend wasn’t structured as it was, but he said efforts to “unwind” that as part of negotiation efforts weren’t successful. Stedman said funding for an $1,100 dividend could be addressed with a special session later this year.

The budget was dramatically voted down Wednesday before it was brought back for another vote later and narrowly passed, with Sen. Lyman Hoffman, the lone Democrat in the majority, switching from “no” on the initial vote to “yes” after moving to rescind the action.

Hoffman didn’t speak to his vote on the floor, and when asked by a reporter why he voted no initially, he said: “Because I could.”

Micciche said he thought “like the rest of us” Hoffman “is impatient with the fact that we have not moved the needle on executing a sustainable plan.”

Micciche said he’d like to see lawmakers call themselves into special session later this year in an effort to resolve the long-running debate over the dividend. He said that will require the majorities working with the minority caucuses and making sure they feel their concerns are being heard.

Dunleavy has called another special session for August. But Micciche said if lawmakers call themselves in, they can set the agenda and take up pieces they want to consider.

“I’m more hopeful today than I have been all session in spite of this very difficult session that you just witnessed,” Micciche said, adding later: “What I’ve seen in the last few days is people saying, this has to be better.”