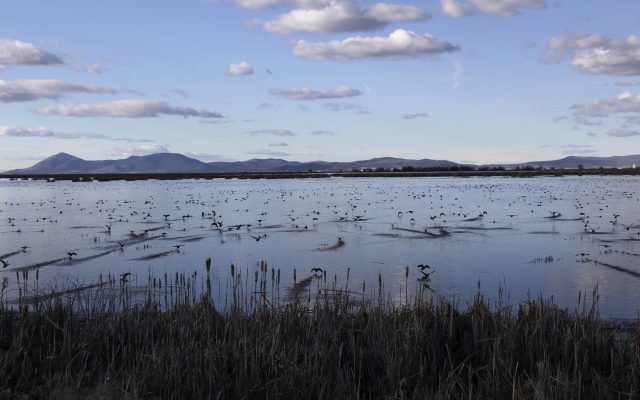 FILE - In this March 2, 2020, file photo, birds take off from a marsh in the Tulelake National Wildlife Refuge in the Klamath Basin along the Oregon-California border. One of the worst droughts in memory in the massive agricultural region straddling the California-Oregon border could mean steep cuts to irrigation water for hundreds of farmers this summer to sustain endangered fish species critical to local tribes. The U.S. Bureau of Reclamation, which oversees water allocations in the federally owned Klamath Project, is expected to announce this week how the season's water will be divvied up after delaying the decision a month. (AP Photo/Gillian Flaccus, File)

KENAI, Alaska (AP) — Ocean farming and aquaculture in Alaska’s coastal regions could get a boost from a federal grant program.

A proposal from Alaska envisions the creation of a shellfish and aquatic plants industry, the Peninsula Clarion reported.

The application is among 60 finalists from a nationwide pool of more than 500. Up to 30 proposals will get funding of between $25 and $100 million.

The proposal aims to turn Alaska’s marine farming and aquaculture into a $100 million per year industry.

“I honestly believe that is possible, especially if we’re able to land this other $50 million to be able to do the different things that we need to do to help and support the industry,” Dillon said.

Interest in mariculture, the cultivation of marine organisms in their natural environments, in Alaska has historically been contingent on funding.

“For years, people have talked about mariculture and there’s been different kinds of task forces and things, and everything has come back to ‘Well, we need money to do things,’” Dillon said.

He added: “No matter what, we’re going to wind up with information that’s going to help us.”