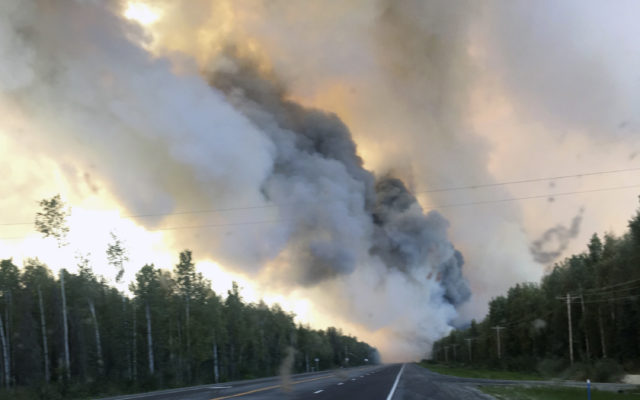 The Alaska Railroad has cancelled passenger service between Anchorage and Denali National Park because of a fire burning along tracks north of Willow.

The fire began Saturday when high wind blew a tree onto a powerline at Mile 91 Parks Highway. Continued strong winds Sunday night pushed the fire across the highway and across railroad tracks.

About 200 rail passengers were transported by bus from Anchorage to Denali and Talkeetna on Sunday.

Southbound passengers from Fairbanks, Denali, and Talkeetna on Sunday were rerouted back to Fairbanks by bus after several hours of delay. They are scheduled to travel south by bus Monday.

The railroad expects to use bus service through Tuesday.

State and federal wildfire crews are getting help for fires that have closed two Alaska highways.

They will be split between fires burning in the Matanuska-Susitna Borough north of Anchorage and on the Kenai Peninsula south of Anchorage.

A fire that began Saturday north of Willow was pushed by high winds across the highway on Sunday night, prompting evacuations of residents who live along the highway.

Local fire departments are assisting the Division of Forestry with protecting structures.

The Parks Highway opened to one lane of traffic Monday morning. The Alaska National Guard and Alaska State Troopers are assisting with traffic control and fire suppression.

The main highway in Alaska that connects Anchorage and Fairbanks has reopened on a limited basis.

A wildfire north of Willow jumped the Parks Highway on Sunday night, prompting a closure for a 9-mile (14.5-kilometer) stretch of the highway. Residents living along the highway were evacuated.

The state Division of Forestry says one lane of traffic reopened at 8 a.m. Monday

Pilot cars are guiding traffic from Milepost 71 to Milepost 99 near the spur road that leads to Talkeetna.

Forestry officials say motorists should expect long delays and the possibility of the road closing again if the fire flares up.

The division says there’s zero visibility and flames on both sides of the road in the restricted area.

A highway on Alaska’s Kenai Peninsula remained closed Monday morning after growth in a wildfire that has burned much of the summer.

The state Division of Forestry says extreme high winds pushed a wildfire Sunday night across the Sterling Highway at Milepost 60.

Emergency officials closed the highway for a 22-mile (35.5-kilometer) stretch from Mileposts 53 to 75.

The spread of the fire closed Skilak Lake Road and the Russian River Ferry, which are heavily used by anglers along the Kenai River.

The fire’s spread led to multiple closures of campgrounds and cabins.

The Sterling Highway is the road connection for drivers traveling between Anchorage and the Kenai Peninsula cities of Kenai, Soldotna and Homer.

A weekend wildfire in Alaska burned at least 50 structures and closed a highway linking the state’s two largest cities.

Forestry officials say the fire began Saturday north of Willow when high wind blew a tree onto a powerline at Mile 91 Parks Highway.

The fire grew to 0.2 square (0.52 sq. kilometer) miles by Sunday morning but remained east of the highway.

Early Sunday night, strong north winds pushed the fire across to the west side of the highway.

That prompted immediate evacuations on both sides of the highway for a 9-mile (14.5-kilometer) stretch from Mileposts 82 to 91.

Firefighters switched their focus from fighting the fire to joining emergency officials in evacuating residents.

The fire by Sunday night had grown to nearly 3 square miles (7.7 sq. kilometers).