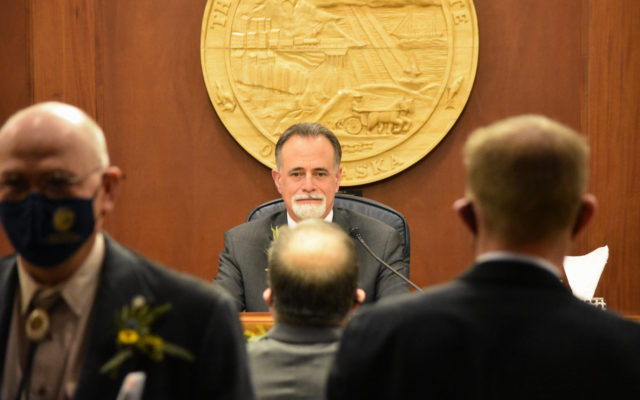 Senate President Peter Micciche, R-Soldotna, has his picture taken by a fellow senator after being unanimously elected on the first day of the 32nd Alaska Legislature on Tuesday, Jan. 19, 2021, in Juneau, Alaska. (Peter Segall/The Juneau Empire via AP, Pool)

By BECKY BOHRER Associated Press
JUNEAU, Alaska (AP) — The Alaska Senate has organized a Republican majority, with Soldotna Republican Peter Micciche elected Senate president. Micciche says plans for the majority were made official Tuesday, ahead of the session’s start. He says the majority would include all 13 Republican members but left open the possibility it could welcome other members. The Senate also has seven Democrats. Micciche’s election as Senate president was held by voice vote, with no one dissenting. The House has not yet organized a majority. The first day of a new Legislature is typically one of pomp, but Tuesday’s start was muted amid COVID-19 concerns.