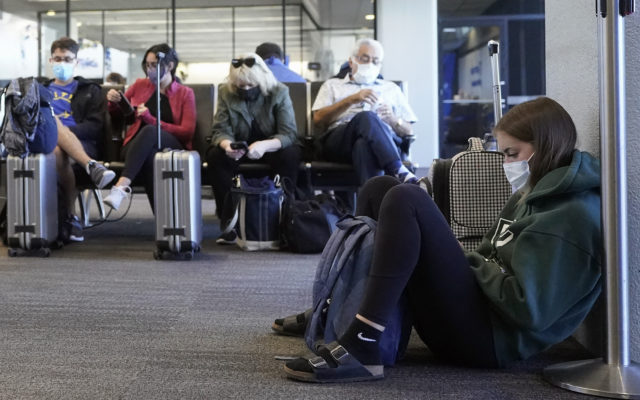 FILE- In this Oct. 15, 2020, file photo, passenger Cari Driggs, right, from Provo, Utah, waits to board a United Airlines flight to Hawaii for vacation at San Francisco International Airport in San Francisco. The CDC is strongly recommending that passengers on planes, trains and buses wear masks, but it's still stopping short of requiring face coverings to prevent spreading COVID-19. All leading U.S. airlines require passengers other than small children to wear masks during flights, but enforcement can be spotty. The Federal Aviation Administration has declined to require masks. (AP Photo/Jeff Chiu, File)

Alaska’s largest airport became one of the nation’s busiest in recent months as disrupted shipping patterns during the COVID-19 pandemic increased cargo activity.

Ted Stevens Anchorage International Airport jumped from the 38th busiest in the U.S. to the eighth busiest based on aircraft operations since the first quarter of 2020, The Anchorage Daily News reported Monday.

The Anchorage facility experienced a 25% increase in cargo volume from July to September compared to the same period last year, the airport said. Nearly 1 million tons (907,185 metric tons) of cargo moved through the airport during those three months.

The airport was the sixth busiest for cargo before the pandemic.

The heavy volume followed record levels achieved in the spring when 900,000 tons (816,466 metric tons) of cargo moved through the airport in the second quarter of the year from April through June, the airport said.

Freight volume increased 13.6% In the first nine months of the year compared to the same period last year, the airport said.

Investors are pursuing new and expanded cargo business development at the airport worth more than $500 million, including opportunities with FedEx and UPS, officials said.