Arrival of final 2 F-35s completes complement at Alaska base 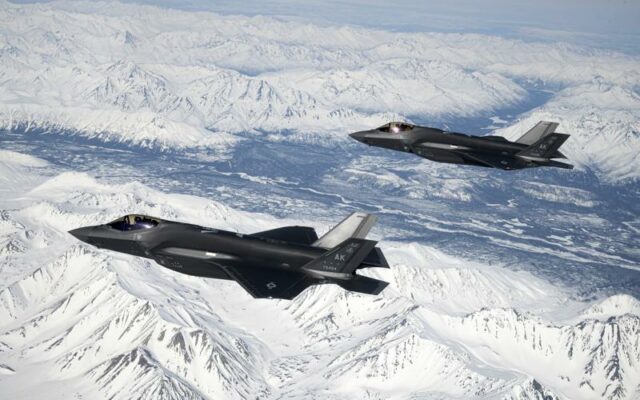 Col. David “Ajax” Berkland of the 354 Fighter Wing at Eielson called it “a really significant day for us in terms of the buildup of Eielson Air Force Base.”

The base was selected in 2016 to host F-35s, spawning a base expansion that cost more than a half billion dollars and includes 36 new buildings and 54 housing units for the F-35s, Fairbanks television station KTVF reported Saturday, a day after the two final jets arrived.

Combined with two squadrons of F-22s at Joint Base Elmendorf-Richardson, Alaska will have more operational fifth generation assets than anywhere else in the world, Eleventh Air Force Commander Lt. Gen. David A. Krumm, told Air Force Magazine. Krumm is the senior military official in Alaska.

“Gen. Billy Mitchell talked about it in the 1930′s, that whoever holds Alaska, holds the world. So the strategic importance of competing and securing our nation’s interests, which were there then, remains as much now as ever,” Berkland told KTVF.

The expansion also includes personnel, with about 3,500 new active duty airmen and their dependents stationed at the base about 25 miles (40 kilometers) south of Fairbanks.

The strategic importance of these aircraft in the Arctic illustrates the Air Force’s capability for readiness, and when it comes to training, you need an area as big as Alaska, Berkland said.

“We are actually sitting inside the greatest air space in the world to train for fifth generation tactics against advanced threats, both on the air and on the ground,” he said.

With the capability to fly more than 12 hours at a time, the F-35s can reach almost anywhere in the Northern Hemisphere in one mission.