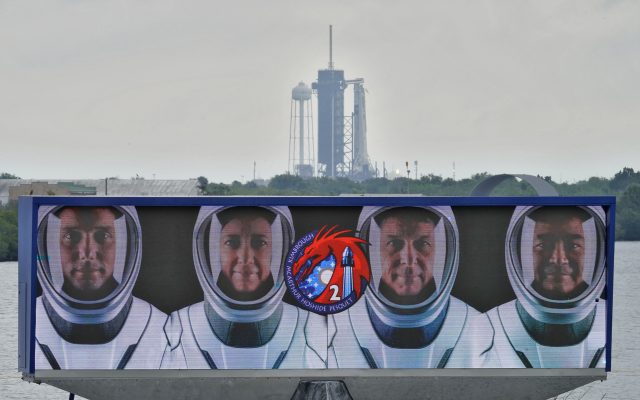 Members of the SpaceX Crew 2, from left, Thomas Pesquet, of the European Space Agency, NASA astronauts Megan McArthur, Shane Kimbrough, and Akihiko Hoshide, of the Japan Aerospace Exploration Agency, are shown on a video screen as the SpaceX Falcon 9 with the crew Dragon capsule sits on Launch Complex 39A Wednesday, April 21, 2021, at the Kennedy Space Center in Cape Canaveral, Fla. Four astronauts will fly on the SpaceX Crew-2 mission to the International Space Station scheduled for launch on April 23, 2021. (AP Photo/Chris O'Meara)

By MARCIA DUNN AP Aerospace Writer
CAPE CANAVERAL, Fla. (AP) — SpaceX has bumped its next astronaut launch by a day because of dangerously high waves and wind offshore. Liftoff is now scheduled for early Friday morning from NASA’s Kennedy Space Center. Officials announced the flight delay Wednesday for the two Americans, one Japanese and one French. The astronauts will spend six months at the International Space Station, arriving aboard a SpaceX Dragon capsule. The capsule has the ability to abort the launch all the way to orbit in case of an emergency. That’s why SpaceX needs good weather not only at the Florida launch site, but all the way up the East Coast and across the North Atlantic to Ireland.