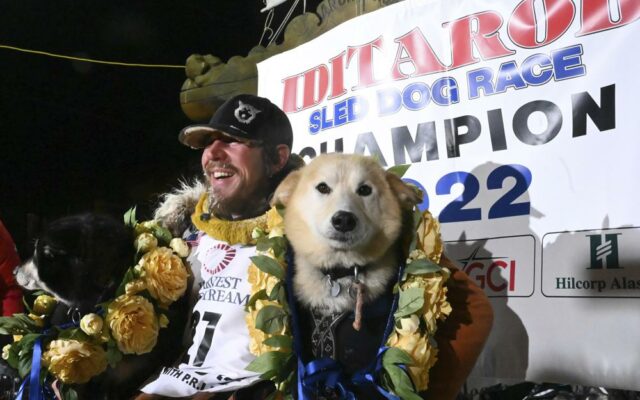 ANCHORAGE, Alaska (AP) — Musher Brent Sass won the arduous Iditarod Trail Sled Dog Race across Alaska on Tuesday as his team of 11 dogs dashed off the Bering Sea ice through a crowd of fans in downtown Nome.

Sass mushed down Front Street and across the finish line just before 6 a.m.

“It’s awesome, it’s a dream come true,” Sass said with his beard and mustache partially encrusted in ice during the post-race interview before he was presented a prize-winning check of $50,000.

“When I started mushing, my goal was to win the Yukon Quest and win the Iditarod. Checked them both off the list now,” he said.

Sass said he was “super, super, super proud” of his dog team. “It’s all on them. They did an excellent job the whole race. I asked a lot of them, and they performed perfectly,” he said.

”Every one of these dogs I’ve raised since puppies, and we’ve been working towards this goal the whole time, and we’re here,” he said, his voice cracking. “It’s crazy.”

Fans lined the street welcoming the popular musher, who was escorted by police for the final few blocks to the famous burled arch that marked his victory.

It’s the first Iditarod win for Sass, a wilderness guide and kennel owner who was running in his seventh Iditarod. His previous best finish was third last year.

Sass took command of this year’s race early on and never was challenged, but the final stretch of the race might have been the toughest, with extreme winds blowing on the Bering Sea ice leading into Nome.

“I had to make it very interesting at the end,” Sass said.

At one point during the last few miles of the race, he took a tumble, and the sled went off the trail. He thought he was going to have to hunker down, stopping with his dogs to wait until the weather improved.

“I couldn’t see anything,” he said. “The dogs, the only reason we got out of there is because they trusted me to get them back to the trail. And once we got back to the trail, they just took off a hundred miles an hour again, and we were able to stay on the trail and get in here. It was a lot of work,” he said.

Sass continually pushed the pace, refusing to even sit down for a gourmet meal prepared by a chef flown in from Anchorage that he won for being the first musher to a checkpoint.

The 42-year-old native of Minnesota who moved north in 1998 to ski for the University of Alaska Fairbanks had about a 90 minute lead over the defending champion, Dallas Seavey, early Tuesday as he left the last checkpoint in Safety, which is 22 miles (35 kilometers) from Nome.

Seavey is tied with musher Rick Swenson for the most Iditarod wins ever at five. Seavey earlier told The Associated Press that he was planning to take some time off after the race to spend with his daughter whether he won or lost it.

Sass said Seavey is “the best right now and being able to, to sort of keep him at bay the whole entire race and, and race against the best guy in the business, that just makes this victory even sweeter.”

Seavey toward the end of the race said he was resigned to runner-up status, telling KTUU-TV at the checkpoint in White Mountain that he couldn’t win unless something went wrong for Sass.

Seavey joked: “We’ve got a pretty solid lead over third.”

The third place musher, Jessie Holmes, was about 50 miles (80 kilometers) behind Seavey on Tuesday.

Seavey arrived in Nome just over an hour after Sass.

Sass finished the race in eight days, 14 hours, 38 minutes and 43 seconds. Besides the declined gourmet meal, he picked up other prizes, including $13,000 in cash and gold nuggets and 25 pounds (11 kilograms) of salmon, for being first to several villages along the trail.

This is the 50th running of the race, which started in 1973. This year’s event began with 49 mushers, and five have dropped out along the trail.

Sass was the Iditarod’s rookie of the year in 2012 when he finished 13th. The next year he fell back to 22nd place, before skipping the 2014 race.

In 2015, he was disqualified when race officials found he had an iPod Touch with him on the trail, a violation of race rules banning two-way communication devices because the iPod Touch could connect to the Internet. He said he was clueless, and wanted his fans to know he had no intention of cheating.

Sass placed 16th the following year before taking a three-year break from the Iditarod. In 2020, he placed fourth and was third last year.

Sass, who lives in the tiny area of Eureka, about a four-hour drive northwest of Fairbanks, had more success in the Yukon Quest International Sled Dog Race.