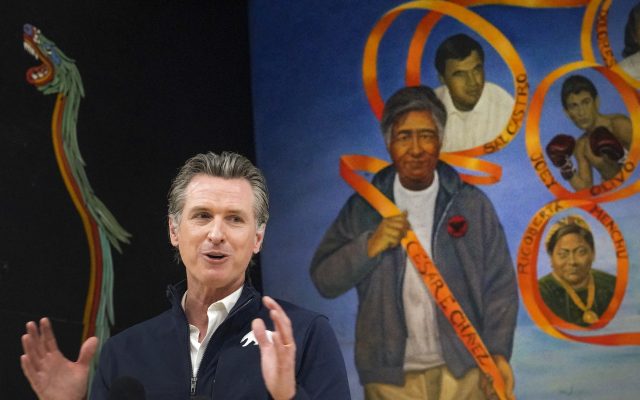 FILE - In this Sunday, Feb. 21, 2021, file photo, California Gov. Gavin Newsom takes questions from the media during a visit to a mobile vaccination site at Ramona Gardens Recreation Center in Los Angeles. Newsom and his Democratic allies launched a campaign committee Monday, March 15 to stop a proposed recall election that could oust him from office. (AP Photo/Damian Dovarganes, File)

By MICHAEL R. BLOOD AP Political Writer
LOS ANGELES (AP) — California Governor Gavin Newsom and his Democratic allies have launched their campaign committee to stop a proposed recall election that could oust him from office. They started their effort Monday with an advertisement attacking the attempted recall as a power grab by Republicans. The committee could soon send a powerful message to Newsom’s possible rivals. Under state rules, Newsom alone is allowed to raise money in unlimited amounts, while other candidates must adhere to contribution limits. Recall supporters say they have collected enough petition signatures to place the proposal on the ballot. But that has not been verified by election officials.