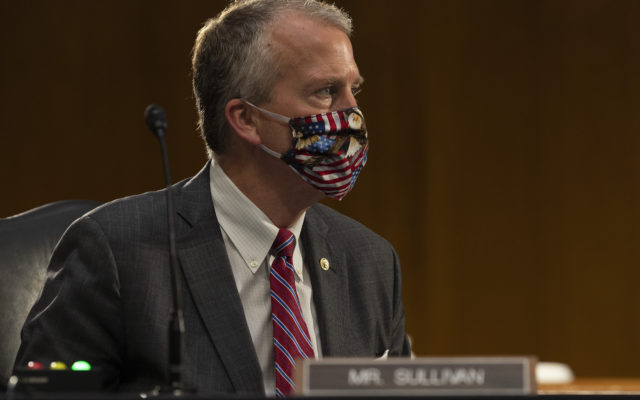 WASHINGTON, DC - MAY 06: US Senator Dan Sullivan, (R-AK) attends a full committee hearing on "The State of the Aviation Industry: Examining the Impact of the COVID-19 Pandemic" on May 6, 2020 on Capitol Hill in Washington, DC. (Photo by Jim Watson-Pool/Getty Images)

JUNEAU, Alaska (AP) — U.S. Sen. Dan Sullivan plans to participate in a broadcast debate next week but his campaign manager says he may have to do so remotely as the Senate moves forward with consideration of President Donald Trump’s Supreme Court nominee. The Alaska Public Media and Alaska’s News Source debate is scheduled for Oct. 23. Sullivan’s campaign manager says Sullivan is happy to debate and to do so remotely. Sullivan’s major challenger in the Nov. 3 election is independent Al Gross, whose campaign sent a release saying Sullivan had asked to move the debate to accommodate plans for being in Washington, D.C.