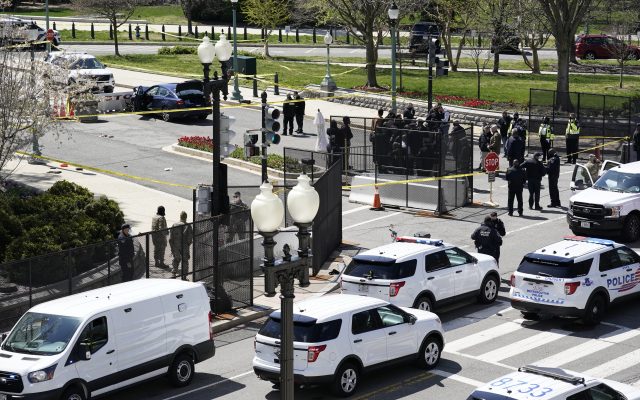 Police officers gather near a car that crashed into a barrier on Capitol Hill in Washington, Friday, April 2, 2021. (AP Photo/J. Scott Applewhite)

By MICHAEL BALSAMO and COLLEEN LONG Associated Press
WASHINGTON (AP) — A Capitol Police officer has been killed after a man rammed a car into two officers at a barricade outside the U.S. Capitol and then emerged wielding a knife. The suspect died at a hospital. Capitol Police Acting Chief Yogananda Pittman did not identify the slain officer or suspect. Authorities said there was no longer an ongoing threat and that the attack did not appear to be related to terrorism. The crash and shooting happened at a security checkpoint near the Capitol as Congress is on recess. It comes as the Washington region remains on edge nearly three months after a mob of armed insurrectionists stormed the Capitol as Congress was voting to certify Joe Biden’s presidential win.