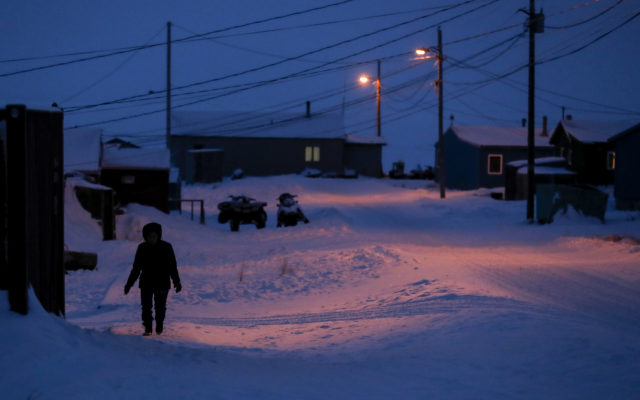 In this Jan. 20, 2020 photo, a woman walks before dawn in Toksook Bay, Alaska, a mostly Yuip'ik village on the edge of the Bering Sea. Census workers traditionally begin the official decennial count in rural Alaska when the ground is still frozen. That allows easier access before the spring melt makes many areas inaccessible to travel and residents scatter to subsistence hunting and fishing grounds. The rest of the nation, including more urban areas of Alaska, begin the census in mid-March. (AP Photo/Gregory Bull)

By MARK THIESSEN
Associated Press
TOKSOOK BAY, Alaska (AP) – The 2020 census in the U.S. will begin this week in a tiny community in Alaska. It has started in rural Alaska ever since the U.S. purchased the territory from Russia in 1867. This year, the first people will be counted in Toksook Bay, a city of 661 on the Bering Sea. Once the spring thaw hits, the town empties as many residents leave to hunt and fish. The mail service is spotty and the internet connectivity unreliable, which makes door-to-door surveying important. For those reasons, they have to start early here.