Curfew made later after protests over shooting of Black man 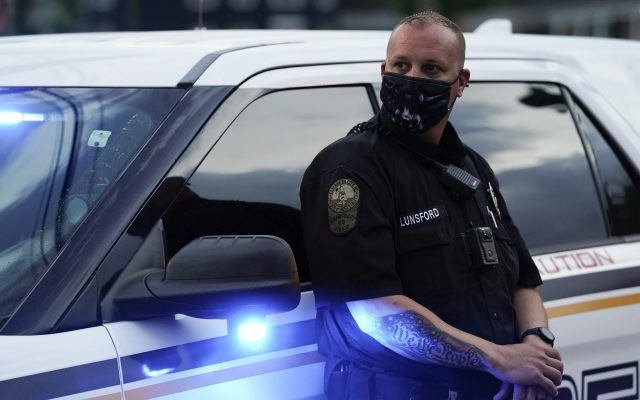 Elizabeth City Police Department Officer Jeremy Lunsford, who was not involved in the shooting death of Andrew Brown Jr., watches as people block an intersection in Elizabeth City, N.C., Wednesday, April 21, 2021, after at least one Pasquotank County Sheriff's deputy shot and killed Brown while executing a search warrant. Pasquotank County Sheriff Tommy Wooten announced in a news release, Thursday, April 29, that he has restored to duty four of the seven deputies who were placed on administrative leave after the shooting death of Brown. (AP Photo/Gerry Broome)

ELIZABETH CITY, N.C. (AP) — A North Carolina city where a Black man was shot and killed by deputies said Friday it will push its curfew back by several hours each night after a week of generally peaceful protests. Elizabeth City officials said that starting Friday night, the curfew will run from midnight until 6 a.m. On previous nights, the curfew had taken effect at 8 p.m. Protesters have been demanding justice and transparency, including the release of deputy body camera footage, after Andrew Brown Jr. was shot and killed last week by deputies serving drug-related warrants. Protests have been generally peaceful, but some protesters have been arrested after they remained on the streets after the curfew went into effect.