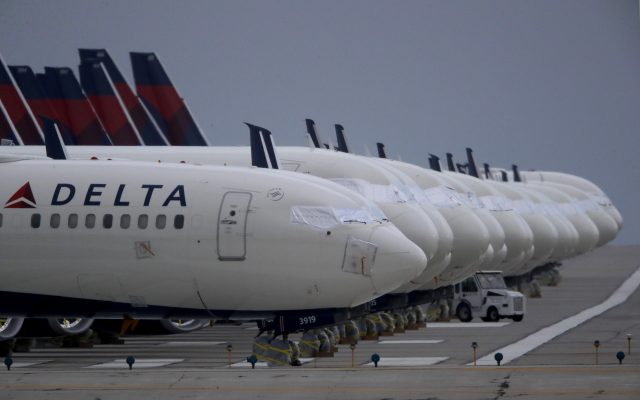 FILE - In this May 14, 2020 file photo, several dozen mothballed Delta Air Lines jets are parked on a closed runway at Kansas City International Airport in Kansas City, Mo. Delta Air Lines will require new employees to be vaccinated against COVID-19 starting Monday, May 17, 2021. The airline won’t impose the same requirement on current employees, more than 60% of whom are vaccinated, a Delta spokesman said Friday. Delta has about 74,000 employees. (AP Photo/Charlie Riedel, File)

By The Associated Press undefined
ATLANTA — Delta Air Lines will require new employees to be vaccinated against COVID-19 starting on Monday.
The airline won’t impose the same requirement on current employees, of whom more than 60% are vaccinated, a spokesman said Friday. The airline says the policy for new hires is designed to protect other employees and passengers as travel demand recovers from last year’s pandemic low levels.
Meanwhile, some airline stocks rose after the CDC’s new guidance for people who are fully vaccinated. United Airlines was up 4% in early Friday trading, and other U.S. airlines rose by smaller amounts.
The federal requirement for wearing face masks on planes remains in place. A spokesman for trade group Airlines for America says carriers will continue to enforce the rule.
The Transportation Security Administration announced 1.74 million people passed through U.S. airports on Thursday, a new pandemic-era high. However, those airport crowds were still 33% smaller than on the comparable day in 2019.