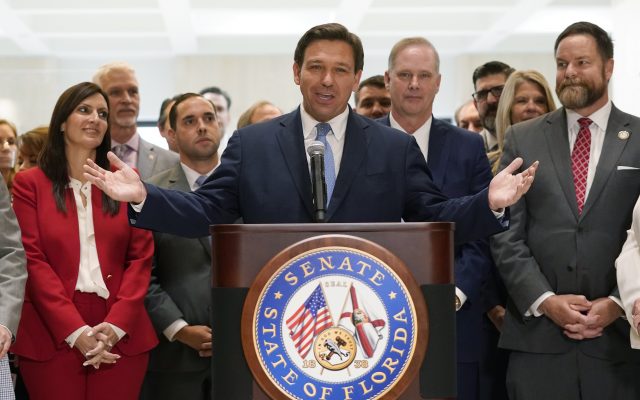 Surrounded by lawmakers, Florida Gov.Ron DeSantis speaks at the end of a legislative session, Friday, April 30, 2021, at the Capitol in Tallahassee, Fla. (AP Photo/Wilfredo Lee)

By BOBBY CAINA CALVAN Associated Press
TALLAHASSEE, Fla. (AP) — Florida Governor Ron DeSantis has signed a sweeping elections bill into law that he and other Republicans said would place guardrails against fraud, even though there were no signs of voter irregularities in the November presidential election. Thursday’s signing is being denounced by Democrats and voter rights advocates. Voter advocates and retirees immediately filed federal lawsuits assailing the law as un-American and anti-democratic. They say it will unfairly target Blacks and Latinos and raise barriers to disabled voters in an attempt to regain a Republican advantage. The Republican governor also soon plans to announce he’s running for reelection.