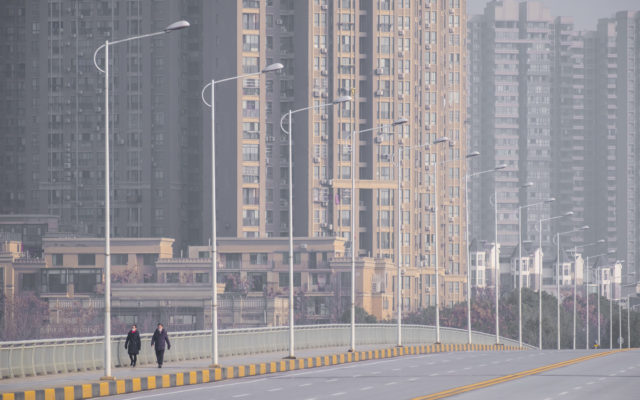 People wearing face masks walk down a deserted street in Wuhan in central China's Hubei Province, Tuesday, Jan. 28, 2020. China's death toll from a new viral disease that is causing a global concern rose by 25 to at least 106 on Tuesday as the United States and other governments prepared to fly their citizens out of the locked-down city at center of the outbreak. (AP Photo/Arek Rataj)

BEIJING (AP) – A Thai navy spokesman says 20 officers sent to Wuhan to oversee construction of Thailand’s first new submarine have returned home after the Chinese city was locked down to contain a viral outbreak. He says the officers had left Wuhan during the Lunar New Year holiday at the shipyard where they were stationed. He says they could not return to the Chinese city after it was quarantined on Jan. 23 so the navy allowed them to return to Thailand on their own. Their return was controversial because it appeared that members of the Thai military received special treatment, while plans to evacuate civilians from Wuhan were put on hold pending an agreement with Chinese authorities.