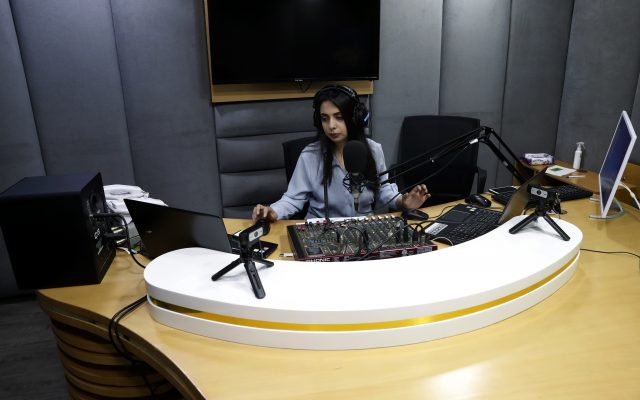 Palestinian journalist Rewaa Mershid works at the studio of ZMN FM radio station in Gaza City, Thursday, May 6, 2021. Mershid, a 26-year-old reporter for a local radio station, was with colleagues filming at a privately owned farm near the heavily guarded Gaza frontier on April 25 when two members of a Hamas-run border patrol approached and asked them to identify themselves. (AP Photo/Adel Hana)

By FARES AKRAM Associated Press
GAZA CITY, Gaza Strip (AP) — A female Palestinian reporter says a member of the Hamas-run border patrol in Gaza beat her with a tree branch for not wearing an Islamic headscarf last month. The incident sparked a public outcry, and the Islamic militant group has promised an apology and says it will punish the man. The 26-year-old reporter for a local radio station was with colleagues filming near the heavily guarded Gaza frontier on Apr. 25 when they were approached by the border patrol and an argument ensued. The incident highlighted Hamas’ occasionally heavy-handed treatment of both reporters and women in Gaza, where it seized power in 2007 from the internationally-backed Palestinian Authority.