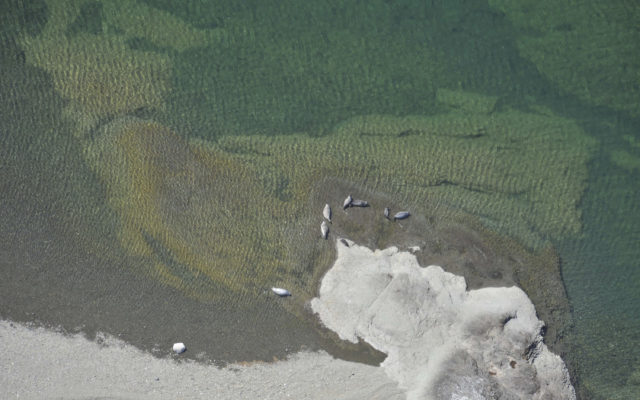 In this June 17, 2011, photo provided by NOAA Fisheries are freshwater seals at Iliamna Lake, Alaska. (Dave Withrow/NOAA Fisheries via AP)

By DAN JOLING
Associated Press
ANCHORAGE, Alaska (AP) – An environmental group is petitioning the federal government to list a population of freshwater Alaska seals under the Endangered Species Act. The Center for Biological Diversity on Thursday petitioned to provide protections to harbor seals that live at Iliamna Lake in southwest Alaska. Biologist Kristin Carden says without more protections, the seals could go extinct. Carden says the 400 seals are threatened by climate change and a proposed copper and gold mine that could harm their habitat. The federal government in 2016 said the lake seals are discrete from harbor seals in saltwater but not ecologically significant to the greater population.