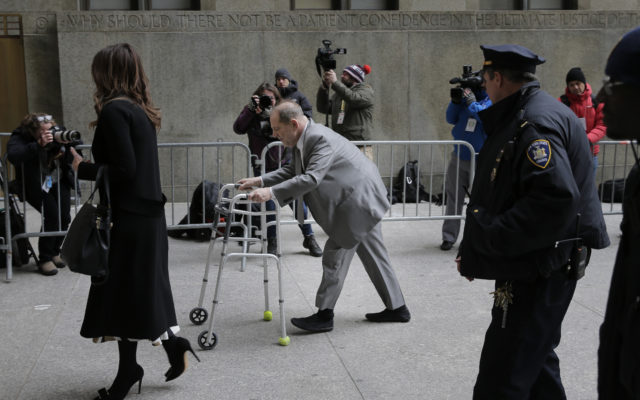 Reporters look on as Harvey Weinstein, center, arrives to court after a break on the first day of jury selection of his sexual assault trial, in New York, Tuesday, Jan. 7, 2020. At left is Weinstein's lead attorney Donna Rotunno. (AP Photo/Seth Wenig)

NEW YORK (AP) – Jury selection is going forward in Harvey Weinstein’s sexual assault trial New York after a judge denied a defense request for a “cooling off period” the morning after prosecutors in Los Angeles brought new charges against him. The 67-year-old disgraced movie titan shuffled into the courthouse Tuesday with a walker. Jury selection could take weeks. The trial involves charges that Weinstein raped a woman in 2013 and forcibly performed a sex act on another woman in 2006. Weinstein has said any sexual activity was consensual. The start of his New York trial comes after Los Angeles prosecutors charged him Monday with sexually assaulting two women there during Oscar week in 2013. Weinstein has repeatedly denied any wrongdoing.