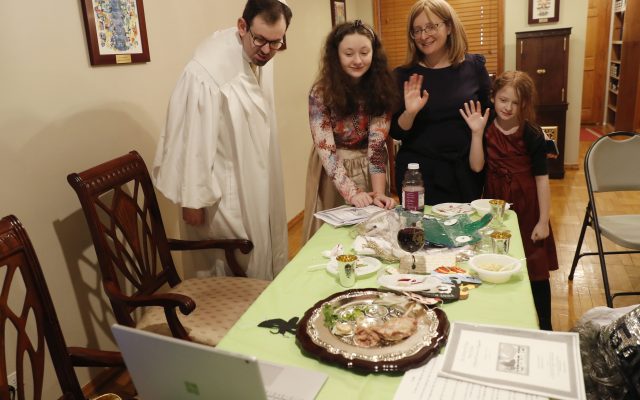 FILE - In this Wednesday, April 8, 2020 file photo, Rabbi Shlomo Segal, left, and his family wave goodbye to participants after he conducted a virtual Passover seder for members of his congregation, friends and family broadcast on YouTube from his home in the Sheepshead Bay neighborhood of Brooklyn during the current coronavirus outbreak in New York. From left, are Segal; daughter Shira, 12; wife, Adina, and daughter, Rayna, 8. In 2021, the Sabbath led directly into Passover, limiting the use of technology for Segal and his congregants. Instead of streaming their seder, the synagogue provided online workshops prior to Passover so families could do it on their own. Segal says that many of his members are still reluctant to gather together in person. (AP Photo/Kathy Willens)

By DAVID CRARY and MARIAM FAM Associated Press
For Christians across the U.S., Easter services on Sunday will reflect an extra measure of joy as the nation sees rising optimism after a year of pandemic. Even if still observing restrictions, many churches may draw the largest numbers of in-person worshippers in months. It’s a season of major holy days for other faiths as well. Jews are observing Passover, and the Muslim holy month of Ramadan begins soon. The Rev. Meredith Mills of Houston’s Westminster United Methodist Church says vaccines are making many people more comfortable about worshipping in person: “It almost feels like we’ve been in Lent for a year, and we are ready for Easter.”