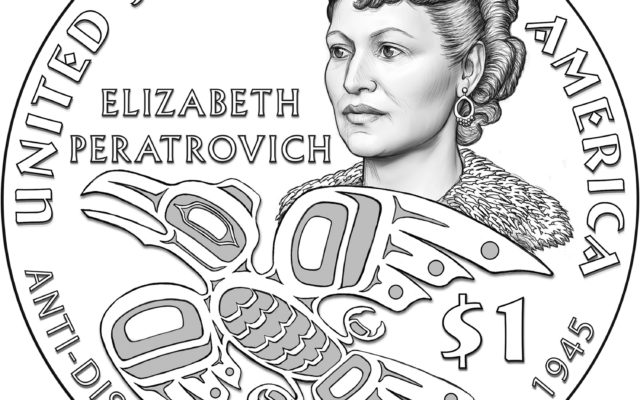 This undated line drawing released by the U.S. Mint shows a new $1 coin that features Elizabeth Peratrovich, a young Alaska Native woman who left an impression on Alaska's territorial Senate in 1945 by persuading the body to pass one of the nation's first anti-discrimination laws. The U.S. Mint unveiled the design on Oct. 5, 2019, at the Alaska Native Brotherhood and Alaska Native Sisterhood convention in Anchorage. The coin features a portrait of the late civil rights leader, composed and graceful, her hair in tight rolls, above words that highlight her legacy: "Anti-discrimination Law of 1945." An image of a raven, depicting her Tlingit lineage, soars near her. The 2020 Native American coin will go on sale early next year. (U.S. Mint via AP)

JUNEAU, Alaska (AP) – Hundreds gathered to celebrate one of Alaska’s civil rights icons, whose image will soon appear on a U.S. gold dollar. The Juneau Empire reported the Alaska Native Brotherhood and Alaska Native Sisterhood sponsored the event in Juneau to honor Elizabeth Peratrovich. The U.S. Mint announced in October that the Tlingit Nation member will become the first Alaska Native to appear on U.S. currency. The event at the Juneau Tlingit and Haida Community Council was held to mark the 75th anniversary of a famed speech by Peratrovich before the territorial legislature of Alaska calling for Native equal rights.