Interior Secretary Haaland in midst of visit to Alaska 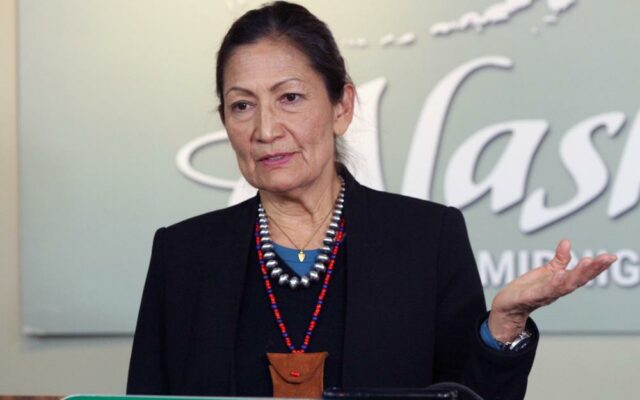 JUNEAU, Alaska (AP) — U.S. Interior Secretary Deb Haaland is in the midst of her first visit to Alaska in that role, including to a community at the center of a long-running dispute over a proposed land exchange aimed at building a road through a national wildlife refuge.

Residents of King Cove have seen a road as a life and safety issue. Haaland was in King Cove on Wednesday with Gov. Mike Dunleavy and U.S. Sen. Lisa Murkowski. King Cove residents have long sought a land connection through Izembek National Wildlife Refuge to Cold Bay, which is about 18 miles (29 kilometers) away and has an all-weather airport.

The refuge is near the tip of the Alaska Peninsula and contains internationally recognized habitat for migrating waterfowl.

Haaland, speaking to reporters from Anchorage on Thursday, she is still “in a learning process” regarding the issue and had no announcements to make about it at this time.

The Interior Department said Haaland had committed to visiting the community early in her tenure, “as part of her ongoing effort to hear directly from communities about the policies that impact them.” Haaland, Murkowski and the director of the U.S. Fish and Wildlife Service also visited Cold Bay and the refuge, the department said.

A U.S. Justice Department attorney last summer said Haaland had not decided what position she would take on a proposed land exchange, saying Haaland planned to review the record and visit King Cove before making a decision. A planned trip to Alaska last year didn’t materialize.

In 2013, then-Secretary Sally Jewell visited King Cove to hear from residents. Jewell later issued a decision declining a land exchange, saying she supported a conclusion by the U.S. Fish and Wildlife Service that building a road through the refuge would cause irreversible damage to the refuge and to wildlife that depend on it.

Under the Trump administration, efforts to advance a land exchange faced legal challenges.

But a divided federal appeals court panel last month reversed a decision by U.S. District Court Judge John Sedwick that had set aside a proposed 2019 agreement that then-Secretary David Bernhardt had entered into with King Cove Corp., an Alaska Native village corporation.

Sedwick had found in part that Bernhardt had failed to provide adequate reasoning to support a change in policy in favor of a land exchange and road. The appeals court ruling disagreed with that assessment.

“The choice to place greater weight on the interests of King Cove residents sufficiently explained the change in policy,” the ruling stated.

The Aleutians East Borough says flights from King Cove’s unpaved airstrip are “delayed or canceled about 30% of the time, usually due to harsh weather conditions.” The community often experiences gales, snow squalls or dense fog, according to the borough. It says the community of Cold Bay has a 10,000-foot (3,048 meter) paved runway at its all-weather airport.

Della Trumble, CEO of the King Cove Corp., said she thought it was important that Haaland was able to hear from residents directly.

“At this point, we just do everything we can and continue forward and with the hope that we can put this all behind us and move forward and be able to have safe access between these two communities,” Trumble said.

Dunleavy, in a statement, said local residents “deserve to be heard by the federal government.”

Haaland said she is being “very thoughtful.”

“I want the people to know that we care about their community. We care about a lot of things,” she said.

Haaland said she is scheduled to leave Sunday.