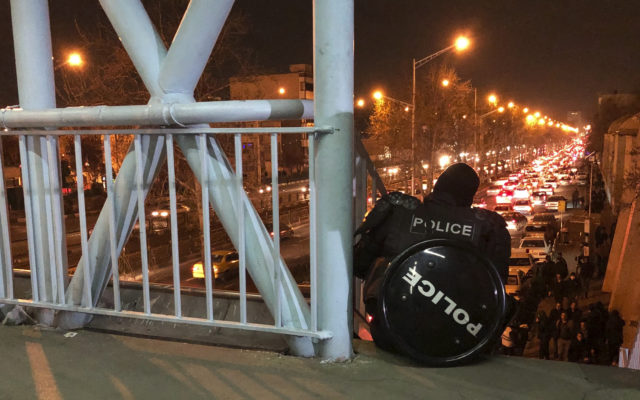 In this photograph taken Sunday, Jan. 12, 2020, a riot police officer watches protesters demonstrating to remember victims of a Ukrainian airplane shot down by an Iranian missile in Tehran, Iran. On Monday, Jan. 13, 2020, online videos purported to show that Iranian security forces fired both live ammunition and tear gas to disperse demonstrators protesting against the Islamic Republic's initial denial that it shot down a Ukrainian jetliner. (AP Photo)

TEHRAN, Iran (AP) – Iran says authorities have made arrests for the accidental shootdown of a Ukrainian passenger plane. The crash killed all 176 people on board. It also sparked protests in Iran demanding accountability, after officials initially concealed the cause of the crash. Iran’s judiciary said Tuesday that “some individuals” were arrested after “extensive investigations.” But he didn’t say how many individuals have been detained or name them. Also, Iran’s president has called for a special court to be set up to try those responsible. While he pointed to mistakes and negligence, he also repeated the government’s line that the plane tragedy was ultimately rooted in U.S. aggression.