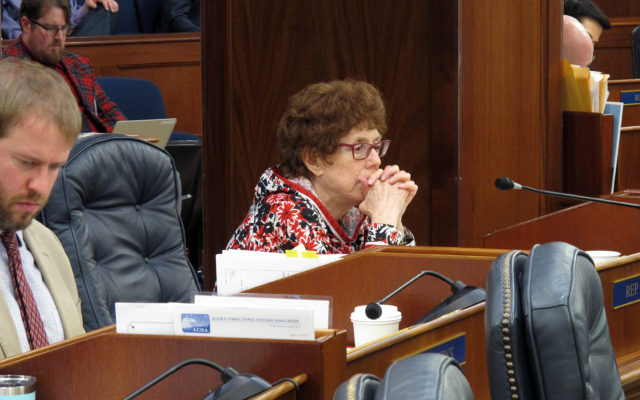 Alaska state Rep. Gabrielle LeDoux sits at her desk on the House floor after saying she would break with her caucus on a budget vote on Friday, May 3, 2019, in Juneau, Alaska. (AP Photo/Becky Bohrer)

JUNEAU, Alaska (AP) – A Republican state lawmaker has been stripped of her committee assignments after breaking with the Alaska House majority coalition over a budget vote.

The House Committee on Committees met without public notice Tuesday to remove Rep. Gabrielle LeDoux from her committees. The coalition’s communications director pointed to legislative rules that say the committee is not subject to the same noticing requirements as other committees.

LeDoux broke with the caucus last week by voting to accept the Senate’s version of the state operating budget. She said she knew the caucus’ rules and the consequences for breaking them.

She voted Tuesday to accept the committee’s report, which included naming a minority Republican, Rep. Laddie Shaw, to replace her as chair of the House Special Committee on Military and Veterans’ Affairs.