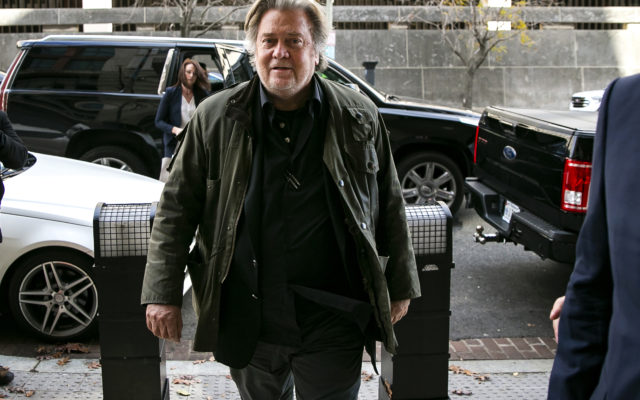 FILE - In this Nov. 8, 2019 file photo, former White House strategist Steve Bannon arrives to testify at the trial of Roger Stone, at federal court in Washington. Bannon was arrested Thursday, Aug. 20, 2020, on charges that he and three others ripped off donors to an online fundraising scheme “We Build The Wall.” The charges were contained in an indictment unsealed in Manhattan federal court. (AP Photo/Al Drago, File)

By LARRY NEUMEISTER Associated Press
NEW YORK (AP) — A May 2021 trial date has been set for President Donald Trump’s former chief strategist on charges that he cheated donors to a group seeking to fund a southern border wall. Steve Bannon appeared by audio but could not be seen Monday on a video screen before U.S. District Judge Analisa Torres. She set a May 24 trial date. He was charged two weeks ago along with three others with unlawfully raising over $25 million. Prosecutors say thousands of investors were duped into thinking all of their donations would go toward the project. But the government alleges that Bannon diverted over a million dollars. He has pleaded not guilty.