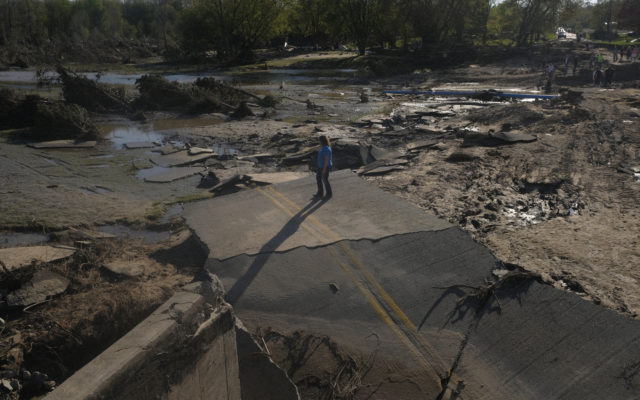 EDENVILLE, MI - MAY 20: Residents explore what remains of the West Curtis Road bridge which was swept away following extreme flooding throughout central Michigan on May 20, 2020 in Edenville, Michigan. Thousands of residents have been ordered to evacuate after two dams in Sanford and Edenville collapsed causing floodwaters from the Tittabawassee River gushing into nearby communities. (Photo by Matthew Hatcher/Getty Images)

By CARLOS OSORIO, COREY WILLIAMS and TAMMY WEBBER undefined
MIDLAND, Mich. (AP) — Floodwaters that overtook dams and forced the evacuation of about 10,000 people in Central Michigan now threaten a Dow Superfund site and downstream communities. The Tittabawassee River crested in Dow’s hometown of Midland Wednesday at just over 35 feet, about 3 feet under what officials previously forecasted. Gov. Gretchen Whitmer had warned the city could end up under about 9 feet of water by Wednesday evening. Dow says floodwater has begun mixing with on-site containment ponds, prompting the company and U.S. Coast Guard to activate emergency plans. A city official says no one has been reported hurt or killed in the flooding. Whitmer says the state will investigate the operators of the Edenville and Sanford dams.