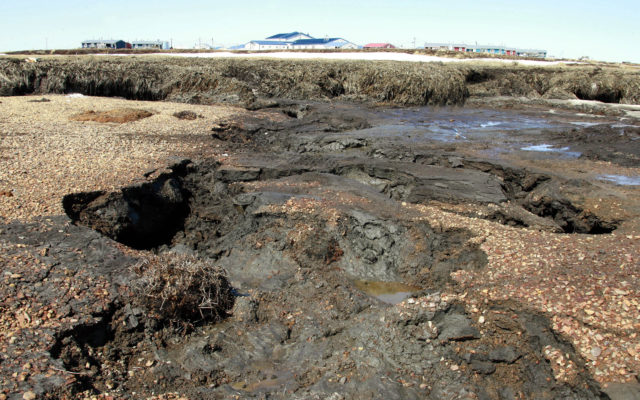 The eroding bank along the Ninglick River at Newtok, Alaska, shown on May 24, 2006, has long been a problem for the village 480 miles west of Anchorage. Residents of the eroded coastal village of Newtok have begun to build a new community on higher ground on a hilly area called Mertarvik on Nelson Island, Alaska. (AP Photo/Al Grillo)

BETHEL, Alaska (AP) – The U.S. military has begun construction work on a site expected to become the new location of an Alaska village.

KYUK-AM reported Wednesday that the U.S. Air Force and Marine Corps started work Tuesday at Mertarvik, a nearby site where the village of Newtok will be relocated.

Officials in the village on the Ningliq River invited the U.S. Department of Defense to develop the area northwest of Bethel for its Innovations Readiness Training.

Officials say military personnel will use the next 10 weeks to construct a gravel road, landfill, heavy equipment shop, and four homes in Mertarvik.