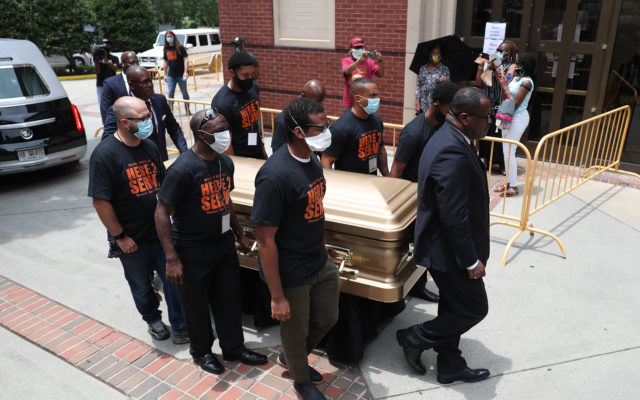 ATLANTA, GEORGIA - JUNE 22: Pallbearers bring the remains of Rayshard Brooks into the Ebenezer Baptist Church for his viewing on June 22, 2020 in Atlanta, Georgia. Brooks was killed June 12 by an Atlanta police officer after a struggle during a field sobriety test in a Wendy's restaurant parking lot. (Photo by Joe Raedle/Getty Images)

By KATE BRUMBACK Associated Press
ATLANTA (AP) — Mourners filed through Atlanta’s Ebenezer Baptist Church on Monday for a public viewing of Rayshard Brooks. A gold-colored casket carrying the body of the man who was fatally shot by police arrived at the church just under an hour before the viewing began Monday. A handful of people were already waiting outside, despite intense sun and, at times, heavy rain. Officer Garrett Rolfe fatally shot Brooks in the back when Brooks fired a Taser in his direction while running away after a struggle on June 12. Rolfe is white. Brooks was Black. Rolfe was fired and is jailed without bond on a murder charge.