Nevada’s Culinary Union will not endorse in Democratic race 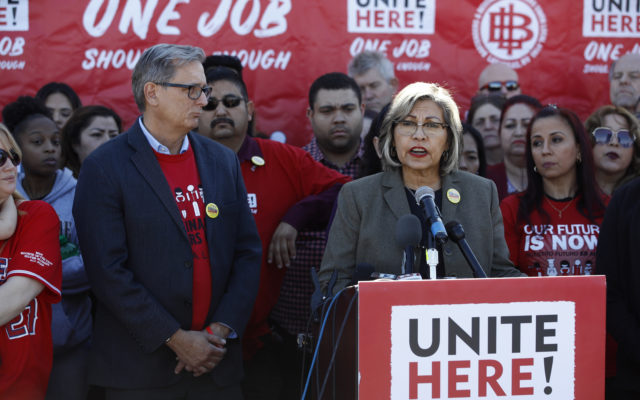 Geoconda Arguello-Kline, right, Secretary-Treasurer of the Culinary Union, speaks at a news conference to announce the union's decision to stay out of the state's Democratic presidential caucuses and not endorse a candidate, Thursday, Feb. 13, 2020, in Las Vegas. (AP Photo/Patrick Semansky)

LAS VEGAS (AP) – The Culinary Union, the most influential union in Nevada politics, has decided to stay out of the state’s Democratic presidential caucuses. The move denies candidates who aggressively courted the group from getting a major leg up in the state’s upcoming contest. The casino workers’ Culinary Union is a 60,000-member group made up of housekeepers, porters, bartenders and more who keep Las Vegas’ glitzy casinos humming. The group said Thursday that it will instead use its organizing power to get out the vote for the Feb. 22 caucuses.