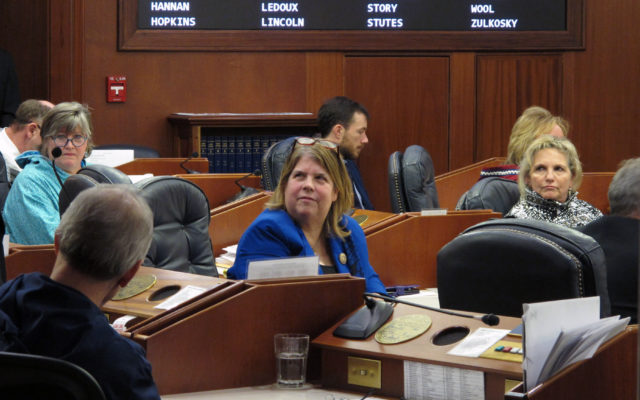 Alaska state Rep. Tammie Wilson, center, listens as a colleague speaks about her on the House floor on Friday, Jan. 24, 2020, in Juneau, Alaska. Wilson, a North Pole Republican, announced Friday that she is resigning from the House for a policy role focused on children's services with the state. (AP Photo/Becky Bohrer)

JUNEAU, Alaska (AP) – Alaska Rep. Tammie Wilson is resigning from the House and will become a policy adviser in the state health commissioner’s office with a focus on children’s services. The North Pole Republican announced her resignation on the floor Friday evening during the first week of the new legislative session. She has been outspoken about her concerns with the Office of Children’s Services. House members from both parties offered kind words about Wilson, calling her a friend, mentor and hard worker. Wilson’s departure will create a vacancy in the 40-member House. By law, the position will be filled by another Republican.