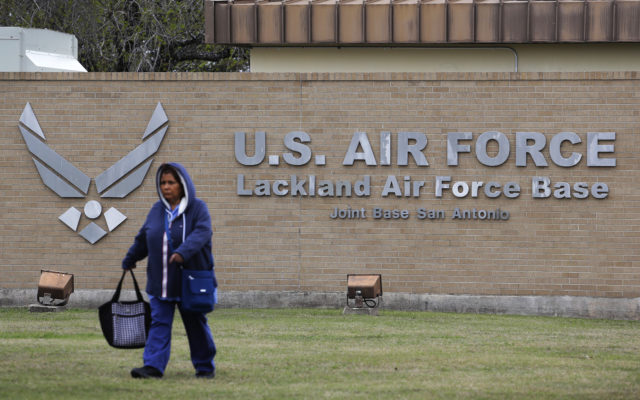 A pedestrian passes the main gate at Lackland Air Force Base in San Antonio, Wednesday, Feb. 5, 2020. Several planes carrying U.S. citizens fleeing the virus zone in Wuhan China will arrive at Air Force bases including Joint Base San Antonio-Lackland, where they will be quarantined for up to 14 days, according to the CDC. (AP Photo/Eric Gay)

OMAHA, Neb. (AP) – Hundreds of Americans being evacuated from China over a viral outbreak will be quarantined in Texas and Nebraska. Officials said Thursday that 70 Americans will be flown into Omaha and quarantined at a nearby Nebraska National Guard training base. In Texas, Lackland Air Force Base was preparing to quarantine as many as 250 people who could arrive soon as Friday. Officials in both Texas and Nebraska said that all of the evacuees should be healthy when they arrive from Wuhan, China, the center of the new coronavirus outbreak. They will be quarantined for 14 days and monitored closely for any signs of illness.