Out West, Biden points to wildfires to push for big spending 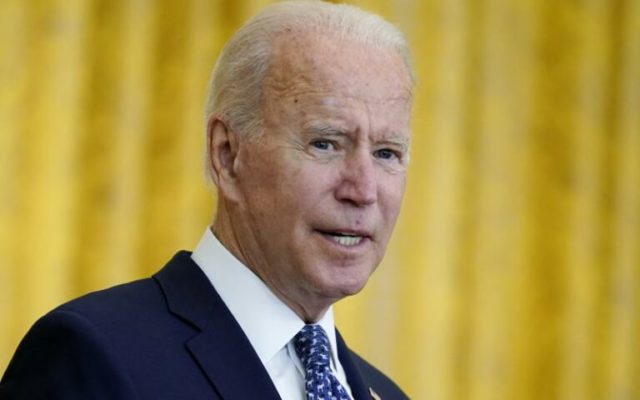 BOISE, Idaho (AP) — President Joe Biden on Monday pointed to wildfires burning through the West to argue for his $3.5 trillion spending plan, calling year-round fires and other extreme weather a climate change reality the nation can no longer ignore.

Biden spoke during a briefing in Boise, Idaho, while visiting the National Interagency Fire Center, which coordinates the government’s response to wildfires.

Millions of acres of land in several Western states have burned already this year, he noted.

In his two-day trip, which includes a stop in Colorado on Tuesday, Biden is looking to connect the dots for Americans between the increasing frequency of wildfires in the West — and other extreme weather events around the country — and a need to invest billions in combating climate change as well as in a vast expansion of the social safety net.

The president argued for spending today to lessen the future effects of climate change, as he did during recent stops in Louisiana, New York and New Jersey — all states that suffered millions of dollars in flood damage and scores of deaths following Hurricane Ida.

In Idaho, Biden claimed that every dollar invested in “resilience” will save $6 down the road.

He discussed the administration’s use in early August of a wartime law to boost supplies of firehoses from the U.S. Forest Service’s primary supplier.

The administration’s use of the Defense Production Act helped an Oklahoma City nonprofit called NewView Oklahoma, which provides the bulk of the U.S. Forest Service’s hoses, obtain needed supplies to produce and ship 415 miles of firehoses.

Biden is on his first trip to the west in office. He flew first to Boise, and afterward planned to stop in Sacramento, California, to survey wildfire damage and deliver remarks about the federal response.

He’ll close the day in Long Beach for an election-eve event with California Democratic Gov. Gavin Newsom, who faces a recall vote on Tuesday,

Biden’s Western visit is aimed primarily at drumming up support for his massive $3.5 trillion spending plan by linking it to beating back wildfires and upgrading social programs.

In deep-red Idaho, several opposing groups were leveraging Biden’s trip as a way to show resistance to his administration. GOP gubernatorial candidates, an anti-vaccine organization and a far-right group were among those urging people to turn out against the president.

More than 1,000 protesters gathered in Boise on Monday before Biden’s arrival to express displeasure with his coronavirus plan, the election and other issues.

Chris Burns, a 62-year-old from Boise, said, “I’m against everything Biden is for.” Burns was especially displeased with a sweeping new vaccine mandate for 100 million people that Biden announced last week. “He’s acting like a dictator,” Burns said.

Biden’s eleventh-hour election pitch in California comes the day before voters head to the polls to decide whether to recall Newsom and then replace him with Republican talk-show host Larry Elder, who’s seen as the leading GOP alternative, or with any of the dozens of other candidates on the ballot.

The White House is trying to turn the corner after a difficult month consumed by a chaotic and violent withdrawal from Afghanistan and the surging delta COVID-19 variant that have upended what the president had hoped would mark a summer in which the nation was finally freed from the coronavirus.

Over the weekend, Biden acknowledged that his polling numbers have dipped in recent weeks, but argued his agenda is “overwhelmingly popular” with Americans. He said he expects his Republican opponents to attack him instead of debating him on the merits of his spending plan.

In addition to Republican opposition in Congress, Biden needs to overcome the skepticism of two key centrist Democrats in the closely divided Senate. Joe Manchin of West Virginia and Kyrsten Sinema of Arizona have expressed concerns about the size of the $3.5 trillion spending package.

The climate provisions in Biden’s plans include tax incentives for clean energy and electric vehicles, investments to transition the economy away from fossil fuels and toward renewable sources such as wind and solar power, and creation of a civilian climate corps.

The president is scheduled to visit Denver on Tuesday to continue to plug his economic agenda.

The stop in Idaho, a state he lost by more than 30 percentage points last year, will offer Biden a deep-red backdrop to argue that making investments to combat the climate crisis should be a priority across party lines. Idaho and California have seen wildfire season turn into a year-round scourge.

The Biden administration in June laid out a strategy to deal with the growing wildfire threat, which included hiring more federal firefighters and implementing new technologies to detect and address fires quickly. Last month, the president approved a disaster declaration for California, providing federal aid for the counties affected by the Dixie and River fires. Just ahead of Monday’s visit he issued another disaster declaration for the state, this time aimed at areas affected by the Caldor Fire.

Biden traveled recently to New York, New Jersey and Louisiana to survey damage caused by Hurricane Ida. He declared it a “code red” moment for the nation to act on climate during a visit to a New York City neighborhood impacted by Ida.