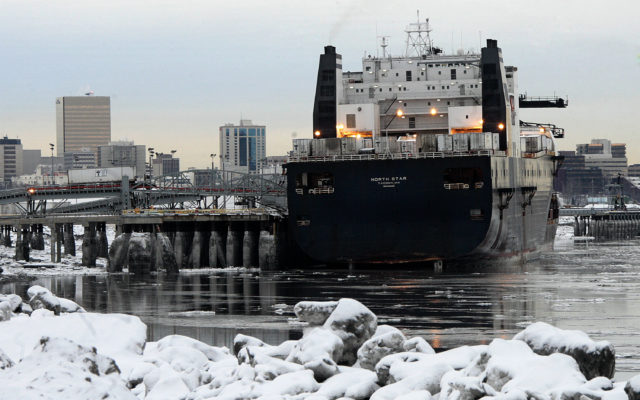 This Jan. 8, 2008 file photo shows trucks loading cargo onto the Totem Ocean Trailer Express container ship North Star at the Port of Anchorage as seen from the newly developed area of the port in Anchorage, Alaska. (AP Photo/Al Grillo, File)

ANCHORAGE, Alaska (AP) – A report by a private consulting firm says the projected cost of the Port of Alaska renovation could be cut by a third or more.
The Alaska Journal of Commerce reported Wednesday that the 97-page draft analysis says Anchorage could save from $600 to $800 million on the $1.9 billion modernization project.
Ascent PGM submitted recommendations to the Anchorage Assembly including limiting new construction and shifting its contracting and design philosophy.
The assembly contracted Ascent and consultancy Northern Compass to find ways to lower the project cost and identify funding options.
The assembly approved a $42 million contract in July to start construction of a new petroleum and cement dock next year.
The work will be the first major development at the port since construction was halted in 2010.
—
Information from: (Anchorage) Alaska Journal of Commerce, http://www.alaskajournal.com