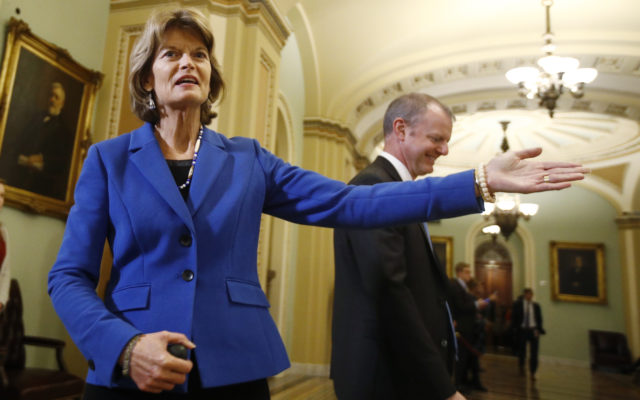 Sen. Lisa Murkowski, R-Alaska, gestures as she leaves the Senate chamber after the vote on witnesses during the impeachment trial of President Donald Trump at the U.S. Capitol Friday, Jan. 31, 2020, in Washington. (AP Photo/Steve Helber)

Murkowski, a Republican who has not officially announced plans for reelection next year, came into 2021 with about $1 million in her campaign coffers. She reported bringing in about $1.1 million during the most recent fundraising quarter and having $2.3 million available as of June 30, her report shows.

Tshibaka, a former state Department of Administration commissioner, ended June with about $275,700 available, her disclosures showed. She reported raising about $545,000 during the second quarter. Her campaign emphasized contributions from Alaskans and small donors. Her report summary showed no contributions from political action or other committees.

Tshibaka has sought to raise her profile on conservative national programs since announcing her candidacy in late March. She also has touted endorsements from former President Donald Trump and state party leaders.

Murkowski, who has a reputation as a moderate, has at times butted heads with party leaders over her position on issues such as abortion and in her criticism of Trump.

Tshibaka reported raising about $215,000 in the initial days of her candidacy, in the first quarter.

During the second quarter, Tshibaka reported more than $480,000 in disbursements, with expenses such as fundraising and consulting costs, video production and other fees, according to her filing.

Contributions reported by Murkowski for the second quarter included about $799,000 from individuals, $202,500 from political action committees and about $144,000 from other committees.

She reported about $165,000 in disbursements, including consulting costs, event expenses and other fees.