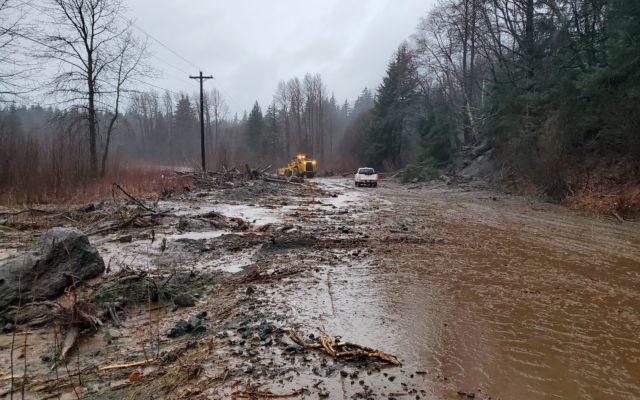 Larson’s family is raising funds to build a school playground that will be named in her honor. Haines students are building benches in memory of both victims, whose bodies have not been recovered.

Torrential rains last December prompted landslides in the community. The largest was estimated at about 600 feet (183 meters) wide.

Haines Mayor Douglas Olerud said the community has “so many caring people” who continue to help rebuild homes and the lives of those affected by the storms.

Paul Graf lives on the side of the landslide away from town. He was evacuated when the road was destroyed and displaced for four months. The community responded by giving him a place to stay in town, along with food, clothes and money.

“It was just overwhelming,” Graf said. “It was absolutely overwhelming the assistance that I got, to the point that I was turning people away, I couldn’t accept anything else.”

Hundreds of homes were damaged in the Chilkat Valley by the record rainfall, and dozens still need repair.

The number of households seeking assistance has dropped to 66 from 131. People from seven households still are not back in their homes.

Some homes now only need minor repairs, while others have been gutted. More than $1.3 million has been distributed to residents in need.

Lemmie Spradlin has been living in a converted garage on her property while volunteers work to rebuild her home, which was flooded for months.

During the ceremony, she hugged members of Team Rubicon, an aid organization that specializes in disaster relief that came to Haines to help.

Residents live with the trauma of the landslide with every downpour. The landslide occurred after a record 10 inches (25 centimeters) of rain fell in two days.

“Every time we’ve had heavy rainfall, you can see it,” Olerud said. “You can hear it from a lot of people because they don’t know what it’s going to bring.”

Graf moved back to his home months before electricity was reconnected. He wants to live in the house as long as possible despite living in the shadow of the mountain that produced the deadly landslide.

Recovery efforts are expected to take up to a decade.

When construction starts after the snow melts next spring, attention will turn to damaged infrastructure from the storms.

Studies are being compiled on the risks of another slide with final reports expected in the next few weeks.

“What we’re trying to ascertain is, how prevalent are these going to be moving forward?” Olerud said.