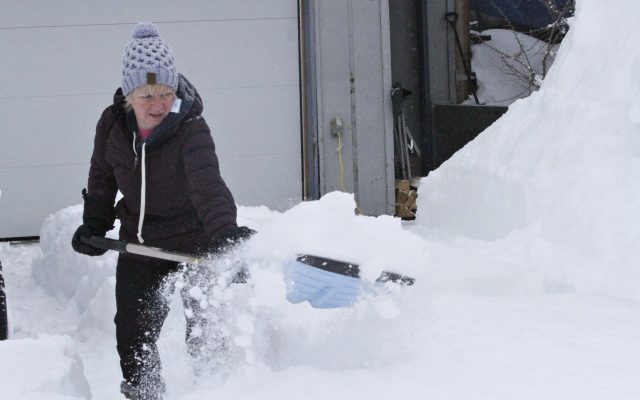 Judi Westfall shovels snow at her home in Anchorage, Alaska, on Thursday, March 11, 2021. Residents in some parts of Alaska’s largest city woke Thursday to a surprise: up to 18 new inches of snow. (AP Photo/Mark Thiessen)

By MARK THIESSEN Associated Press
ANCHORAGE, Alaska (AP) — Residents in some parts of Alaska’s large city woke up to a surprise Thursday morning: up to 18 inches of snow. National Weather Service meteorologist Michael Kutz said it was unusual in that the western side of Anchorage got a lot less snow than the eastern side. While the parts of Anchorage closest to the mountains were shoveling almost a foot-and-a-half of snow, those on the western side, or closest to the ocean, had only about 3 inches. Even where the snow was the deepest, there were few problems in a winter city that is accustomed to operating as normal after a big storm.