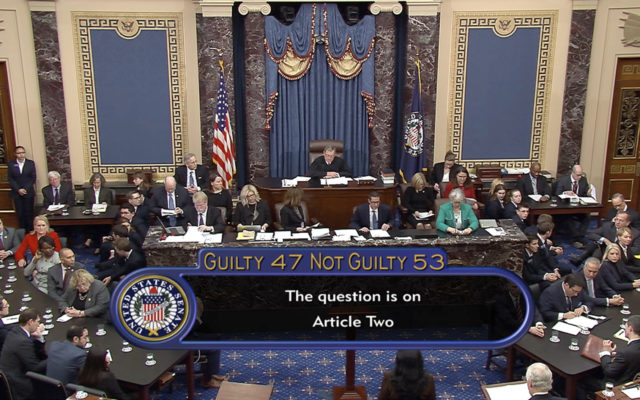 In this image from video, the vote total, 53-47 for not guilty, on the second article of impeachment, obstruction of congress, is displayed on screen during the impeachment trial against President Donald Trump in the Senate at the U.S. Capitol in Washington, Wednesday, Feb. 5, 2020. (Senate Television via AP)

WASHINGTON (AP) – The U.S. Senate has acquitted President Donald Trump of impeachment, ending only the third presidential trial in American history with votes that split the country and tested civic norms. The proceedings also are feeding the tumultuous 2020 run for the White House. A majority of senators expressed unease with Trump’s pressure campaign on Ukraine that resulted in the two articles of impeachment. But there was nowhere near the two-thirds vote necessary in the Republican-held Senate to remove the president from office. He was found not guilty of both articles of impeachment. Trump is eager to use the tally as vindication, a political anthem in his reelection bid.