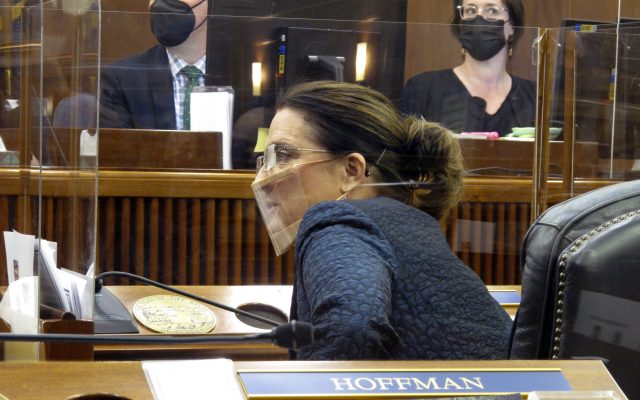 Alaska state Sen. Lora Reinbold is pictured on the floor of the Alaska Senate on Monday, April 26, 2021, in Juneau, Alaska. Reinbold said she traveled to Juneau by vehicle and ferry when Alaska Airlines said she was not permitted to fly on the carrier for what the airline said was her "continued refusal to comply with employee instruction regarding the current mask policy." It was not clear how long the suspension would be in place. (AP Photo/Becky Bohrer, Pool)

By BECKY BOHRER Associated Press
JUNEAU, Alaska (AP) — Alaska state Sen. Lora Reinbold drove through part of Canada and took a ferry to reach the state’s capital over the weekend after Alaska Airlines suspended her from its flights. The airline suspended Reinbold on Friday for what it called her “continued refusal to comply with employee instruction regarding the current mask policy.” It’s unclear how long the suspension might last. An airline spokesperson says a suspension is considered temporary until evidence is further reviewed by a security and safety team. Reinbold said Monday she hopes she can put the issue behind her and be on an Alaska Airlines flight again soon.