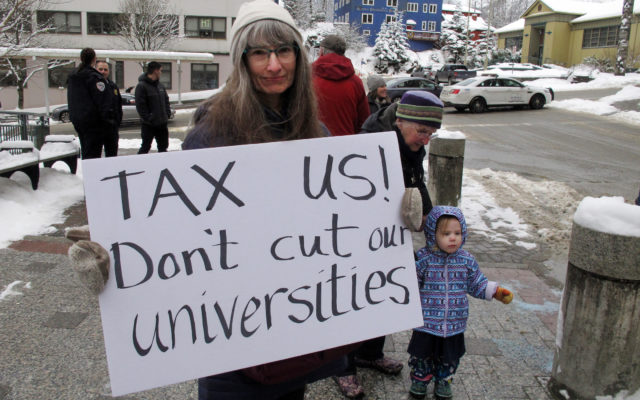 Luann McVey holds a sign before the start of a rally held in support of the Alaska university system on Wednesday, Feb. 13, 2019, in Juneau, Alaska. (AP Photo/Becky Bohrer)

JUNEAU, Alaska (AP) – Students and others gathered in front of the state Capitol Monday in support of the University of Alaska system amid ongoing debate over the state budget.

Signs held up in the windy conditions read such things as “Fund our Future” and “Alaska Stands Tall for UA,” a riff on Gov. Mike Dunleavy’s “Standing Tall for Alaska” campaign slogan.

The university system faces a $134 million budget cut that its president has said would be devastating. Students Monday spoke of the impact the system has had on them and worries about the proposed cuts.

Nick Bursell, a senior at the University of Alaska Southeast in Juneau, says it has meant a lot to him to be able to pursue a degree in his hometown.