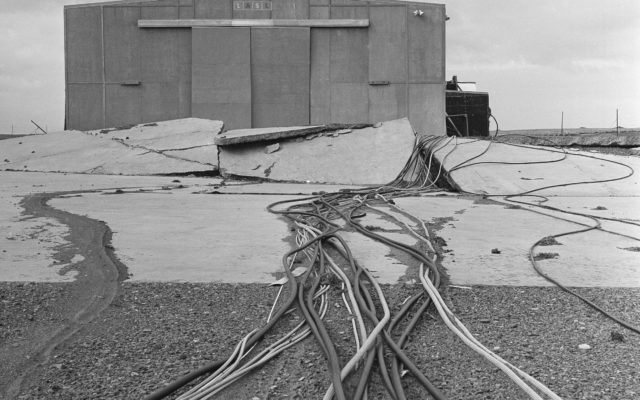 FILE - This file photo from June of 1971 shows a buckled cement pad that was damaged from the 1 megaton nuclear blast "Milrow", detonated 4,000 feet underground in 1969, Amchitka Island, Alaska the site of nuclear bomb testing in the 1960s and 1970s. The U.S. government conducted three underground nuclear tests on the island, located in Alaska's Aluetian chain, in the 1960s and 1970s, and the Energy department is responsible for long-term stewardship and monitoring of the sites. (AP Photo, file)

By RACHEL D’ORO
Associated Press
ANCHORAGE, Alaska (AP) – Officials say the latest round of testing on Alaska’s Amchitka Island found no radioactive material has leaked from locations where the federal government conducted underground nuclear tests there decades ago.

Nguyen, the DOE’s site manager for Amchitka work, also said a 2014 earthquake with a magnitude 7.9 damaged caps of three drilling mud pits on the now-uninhabited island. But he said none of the diesel-fuel filled mud was exposed. The damage has not yet been repaired.

Three nuclear tests were conducted between 1965 and 1971 on Amchitka, located in the Aleutian Islands chain 1,340 miles southwest of Anchorage.