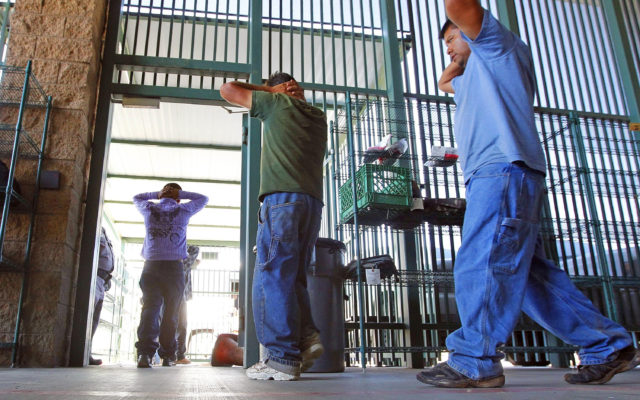 FILE - In this Aug. 9, 2012, file photo, suspected illegal immigrants are transferred out of the holding area after being processed at the Tucson Sector of the U.S. Customs and Border Protection headquarters in Tucson, Ariz. (AP Photo/Ross D. Franklin, File)

TUCSON, Ariz. (AP) – The trial in a lawsuit alleging unsafe and inhuman detention conditions in several of the Border Patrol’s Arizona stations has begun in Tucson. The lawsuit filed in 2015 applies to eight Border Patrol facilities where attorneys say migrants are held in unsafe and inhumane conditions. The Border Patrol is already required to provide thin blankets and clean sleeping mats to migrants held for longer than 12 hours after the judge overseeing the case issued a preliminary injunction in 2016. But advocates say the Border Patrol still holds immigrants for prolonged periods in filthy and freezing conditions. The agency says its facilities are designed for adults and short-term stays.