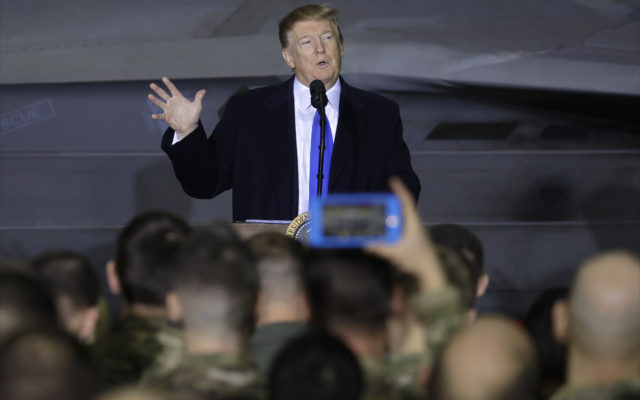 President Donald Trump speaks to service members at Joint Base Elmendorf-Richardson, Thursday, Feb. 28, 2019, in Anchorage, Alaska., during a refueling stop as he returns from Hanoi. (AP Photo/Evan Vucci)

JOINT BASE ELMENDORF-RICHARDSON, Alaska (AP) – President Donald Trump addressed troops at Joint Base Elmendorf-Richardson when Air Force One made a refueling stop Thursday.

Trump was traveling back to Washington after his summit with North Korean leader Kim Jong Un (kim jawng oon) collapsed in Vietnam.

Trump didn’t address the talks during his address in a hangar.

Instead, Trump praised the Alaska-based troops as America’s first line of defense in North America, and noted the military’s strong presence here since World War II.

Trump also noted his wife, first lady Melania Trump, visited the base in 2017 and passed along her greetings to the soldiers.

Trump acknowledged Gov. Mike Dunleavy during his nearly 20-minute appearance. He told Dunleavy he could call him anytime he has a problem “and we’ll take care of it for Alaska.”