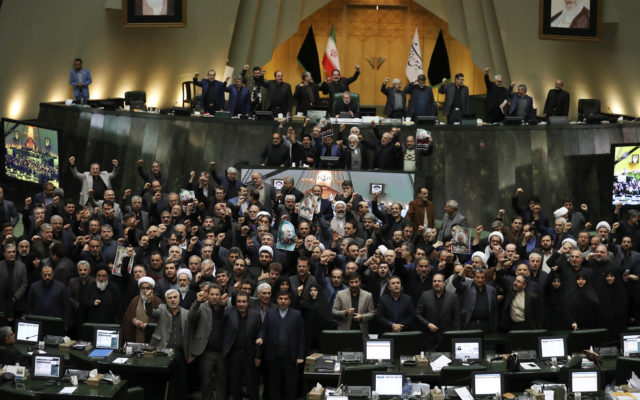 Iranian lawmakers chant slogans as some of them hold posters of Gen. Qassem Soleimani, who was killed in Iraq in a U.S. drone attack, in an open session of parliament, in Tehran, Iran, Tuesday, Jan. 7, 2020. Iran's parliament has passed an urgent bill declaring the U.S. military's command at the Pentagon in Washington and those acting on its behalf "terrorists," subject to Iranian sanctions. (AP Photo/Vahid Salemi)

WASHINGTON (AP) – President Donald Trump says his administration will immediately impose new economic sanctions on Iran in response to Iranian missile strikes on U.S. bases in Iraq. The vow left many wondering what’s left to sanction, since the Trump administration has already reimposed all the U.S. sanctions that were eased under the 2015 nuclear deal. But it still has room to boost the penalties. It can expand existing sanctions on Iran’s financial, energy, shipping and military sectors. It also can target Iranian officials and their families with penalties, including asset freezes and travel bans. And it can raise the pressure by threatening foreign individuals and companies if they do business with designated Iranians.