US agency to review possible protections for Alaska wolf 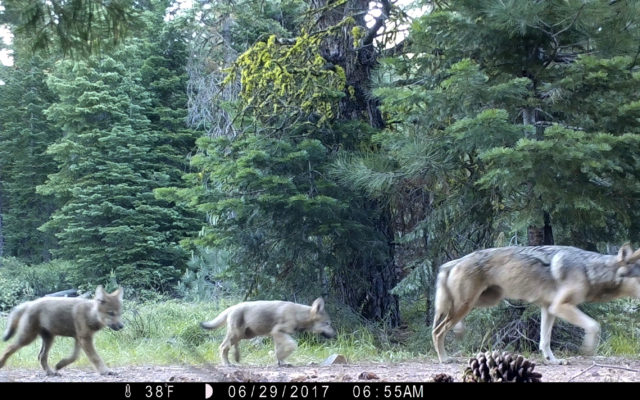 FILE - This June 29, 2017, file remote camera image provided by the U.S. Forest Service shows a female gray wolf and two of the three pups born in 2017 in the wilds of Lassen National Forest in Northern California. Trump administration officials on Thursday, Oct. 29, 2020, stripped Endangered Species Act protections for gray wolves in most of the U.S., ending longstanding federal safeguards and putting states in charge of overseeing the predators. (U.S. Forest Service via AP, File)

The plans are outlined in a document set to be published in the Federal Register on Tuesday. The document states that a petition from conservation groups to protect the Alexander Archipelago wolf included information indicating protections may be warranted due to potential threats associated with logging, illegal and legal trapping and hunting, climate change impacts and loss of genetic diversity.

The agency said it is initiating a status review to determine if protections are warranted. An email seeking comment was sent to an agency spokesperson Monday.

The wolves are found in the coastal rainforests of southeast Alaska and British Columbia and a petition filed last year by the Center for Biological Diversity, Alaska Rainforest Defenders and Defenders of Wildlife raised particular concerns about the wolves in Alaska and on southeast Alaska’s Prince of Wales Island.

In 2016, the Fish and Wildlife Service determined the wolf did not warrant Endangered Species Act protections.

Conservationists contend that recent federal proposals to end large-scale, old-growth timber sales in southeast Alaska’s Tongass National Forest and to take steps to reverse a Trump administration decision to lift restrictions on logging and road-building in the forest don’t erase the concerns for the wolf. They also cite wolf numbers, impacts from logging in the forest and on state lands and other factors as concerns.

Ted Zukoski, a senior attorney at the Center for Biological Diversity, called the wolves “vital to the health of the Tongass forest ecosystem.”