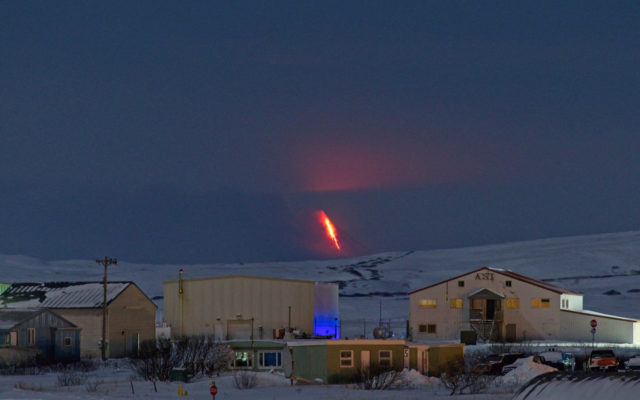 This Monday, Jan. 6, 2020, photo provided by Aaron Merculief shows lava flowing from a vent on the Shishaldin Volcano, as seen from Cold Bay, Alaska about 58 miles North East of Shishaldin. (Aaron Merculief via AP)

ANCHORAGE, Alaska (AP) — A volcanic eruption in Alaska’s Aleutian Islands chain sent an ash cloud into the air that remained visible on satellite images hours later but the threat level after the late Tuesday explosive blast was reduced as activity quieted, the Alaska Volcano Observatory said.

The observatory, in a statement Wednesday, said a 1-2 minute eruption of Great Sitkin Volcano began late Tuesday, resulting in an ash cloud that rose up to 15,000 feet above sea level. Since that eruption, seismicity had decreased and satellite images showed no additional ash emissions, the statement said. It noted that additional “explosive events are possible, but not certain.”

The observatory downgraded the volcano alert level from warning to watch and also reduced the aviation alert level.

It covers most of the northern half of Great Sitkin Island and erupted at least three times during the last century, most recently in 1974, according to the observatory.